No one was taken to the hospital, although things looked serious with our little street clogged by two emergency vehicles. A sobering thought — all the adults I know in these six houses are over 60. 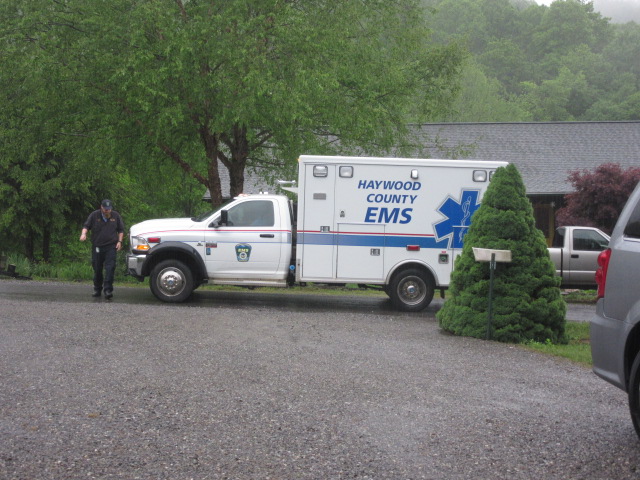 I was hurrying to get breakfast on the table. We were driving to Tennessee to pick up our repaired van, and grandson David was finding out that he had to work later. John had gone outside because of the emergency and came back with Logan. As I walked food to the table, Logan (7) made a squeaky sound with his sneakers, rubber soles on wood. Think basketball practice in a resonant gym. John asked if I had a granola bar for him to take to school for a snack. I did, but I didn’t want Logan to know where I hid them. I asked the boy to go all the way to David’s room and back while making that noise. That gave me time to get out the snack, and I could track him by the sound. An added bonus was rousing David to come to breakfast. I suspect Logan was tired of having to squeak, because he didn’t do it any more.

I asked if he had eaten, and he said he had. As John ate, Logan’s eyes kept going to my plate with a buttered English muffin. I asked, “Would you like that muffin? Eat that one, and I’ll make another for myself.”

Logan finished half the muffin when John was ready to go, and he took the other half in the car. As you might guess, grandmotherly types love to feed people.

We came back from Tennessee mid-afternoon. We found that our neighbor was home, still waiting for results of tests. For those of you so inclined, please pray for patience and healing. Thank you.

Sugar And Spice And Everything Mice