I have arrived!!! I had flowers in the bathroom, which is the ultimate status symbol for me. From time to time I watched shows that someone here had 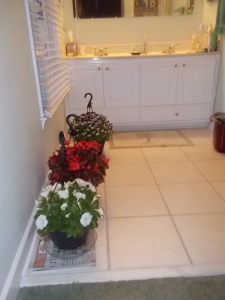 on TV, the programs where people were searching for a house to buy or renovating one. The shows always seemed to end with a grand housewarming party where nothing was out of place. Beautiful flower arrangements added the final touch of grandeur. The last place you’d put flowers was in the bathroom. Well, maybe the laundry room would be the very last, but you get the idea. Anyway, last night and this morning there were lovely blooms decorating the master bath. I swept in like I owned the place and had a right to such excessive luxury.

Of course, there is a story behind it. We bought a plant stand yesterday and the hanging planters to hook on it. The whole setup looked lovely on the bedroom deck. In the evening we saw dire warnings of frost in the mountains, and I pulled those new plants in before you could say Jack Rabbit, or more to the point, Jack Frost. This morning the thermometer on the back porch registered 35 degrees as I went out to walk, so the plants probably would have survived. They were used to being outdoors in the garden center. I’ll look at tonight’s forecast before I put them outside again.

If being a plant hoverer doesn’t make me appear eccentric, I’ll tell you that the birds are talking to me. Many of the wrens and sparrows here sound similar, so I don’t know who was speaking. This one bird kept saying, “Decisions! Decisions!” He had a distinct, fake French accent with a nasal twang. I guess if you say only one thing, you need to say it decisively. He did. Further down the road was a bird that Pollocks and Johnsons would have liked. He repeated over and over, “Ski jump. Ski jump. Ski jump.”

The pileated woodpecker didn’t speak, but I heard an insistent rat-a-tat-tat in the woods, along with his distinctive call. If I hadn’t been so self-conscious, I might have spotted him. I had just walked up the steep hill on Qualla and turned into Woodmore. People who must be my neighbors kept driving by, and I didn’t want them to see me standing idly by the roadside. I do have some pride and didn’t want to look like an idiot with my head cocked to one side. I’m walking as the sun rises, so maybe in a week or so these people will still be eating breakfast when I want to commune with the woodpecker.

Doves were on the railing. I d 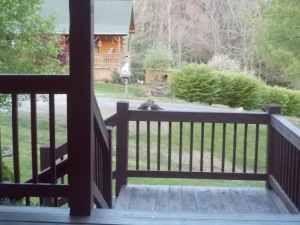 on’t know that they were billing and cooing, because I was on the other side of the front door. They were using their bills, though, pecking gently at each other as if they were kissing each other’s necks. Wikipedia states that the words billing and cooing have been used since Shakespeare’s time and comes from the courtship of doves. I had no idea I was looking at a couple out on a heavy date.