The graduation ceremony was like most others – dignified and solemn. What made this one different? This graduation was OURS!!! Our grandson graduated from college, and we were as proud as could be. There were only three tickets per student, which covered Kate, John, and me. We wished for one more for David’s roommate, but he saw it streamed to a nearby building.

An organist and two trumpeters played a beautiful piece as the faculty processed in.  They switched to the traditional Elgar for the students.

We wondered if David could find us, because we were in the very first row! Kate saw him looking straight at us from that group of 219. John and I were amazed at the number. We thought there might be 10 or so mid-year graduates.

One of David’s favorites, the head of the music department, was announcing the names as the students went up for their diplomas. David was in the choir all four years and enjoyed Dr. J. Maybe this is standard procedure, but I thought it brilliant. Each student handed him a card with his name on it, along with the phonetic spelling. 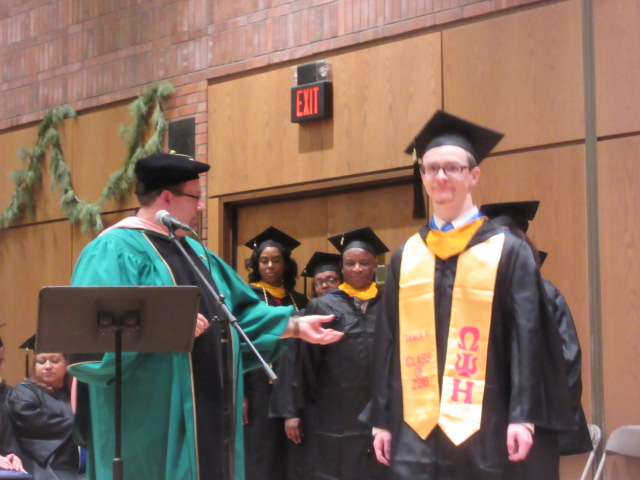 The president of the college handed the diploma to the student and turned to pose for the official photo. Dr. Nunes had a wonderful smile for each and every one!

Dr. Nunes addressed the class and instructed them to change their tassels from the right side of the cap to the left. I was relieved none of the caps were tossed into the air. The new alumni followed the faculty out of the building to music by Handel.

We ended the day with a celebratory meal at the Odyssey. The Odyssey is the diner in Broxville where John took Lise, Kate, and David (all now alumni of Concordia) when he went to see them or was on campus for a meeting. Justin and Caroline were special friends of David who were at the graduation. They returned to campus, and Kate drove home. We began the trip to North Carolina, going into Pennsylvania before stopping for the night. It had been a long day, but a very satisfying one.