Having people who are ready to play anytime, anywhere, keeps life from being dull. While John was gone, I asked Nathaniel to check the waterfall pool because we had had so much rain. He found it on the brink of overflowing. Grabbing the first vessel he could put his hands on, he was going to bail it out. The watering can wouldn’t work, but he removed water with a plastic container. Although that could have been classed as work, he made it fun. 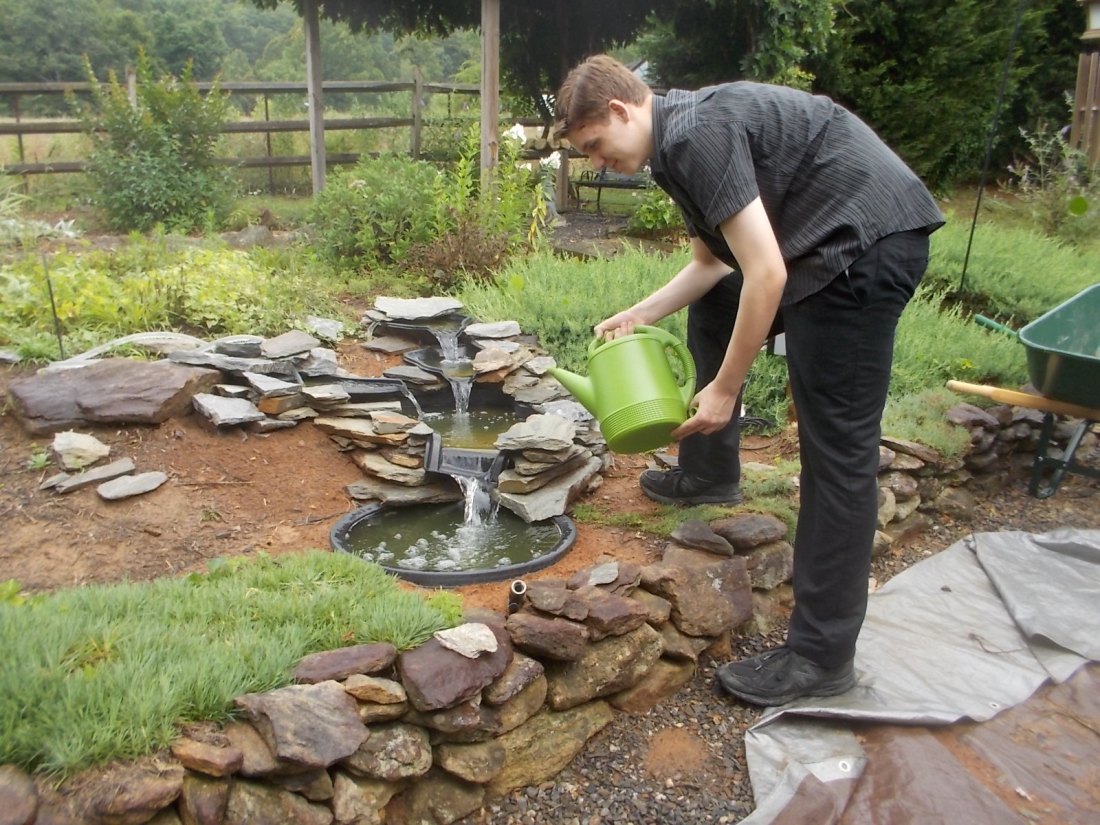 The boys and I enjoyed working a jigsaw puzzle I found at a thrift shop while browsing with former neighbor Amy. We plan to attack the puzzle she gave us, a 1,000-piece one of a steam engine. That’s one I wouldn’t tackle alone. How would you sit or stand to work a jigsaw puzzle? David had a novel perch. How he could sit like that AND find pieces was beyond me! In case you can’t see it well, his feet were on top of the stool.

While unpacking some of his things, David put a stuffed creature on his head, which amused Nathaniel.

Almost every day the fellows play Rail Baron, a board game that can last longer than Monopoly. They buy railroads and roll their way around the country for an hour or so. From the next room I could hear them declaring where they were headed. I thought it was a fun way to enhance the boys’ knowledge of geography. 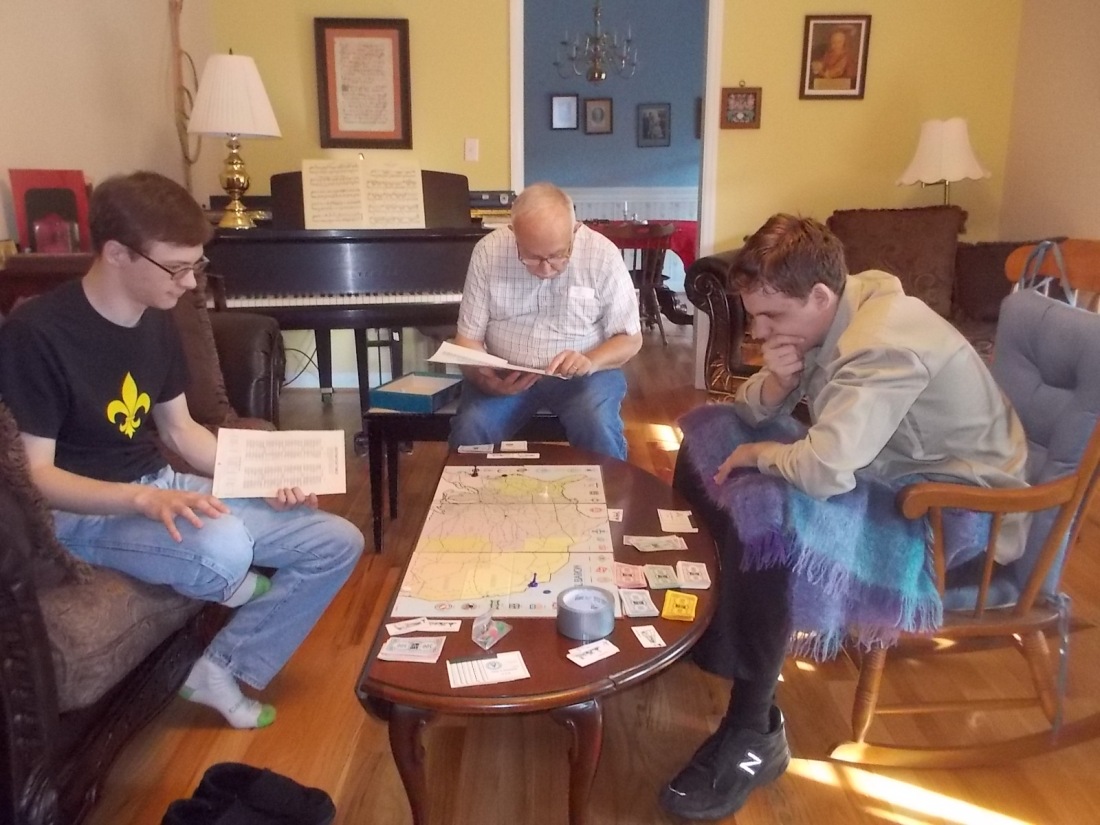 David got out a toy his godparents, Tonja and Anders, gave him years ago. It had lost none of its charm. He knew I enjoyed his creations, so he set up a single row for me to play with. During the day he and Nathaniel changed it several times, and it even came to the dinner table. John helped with a revision, and they made a three-sided structure that I didn’t think would work. It did.

From his porch, Logan may have seen me reading the newspaper on our porch. He approached quietly, holding a book in his arms. I wasn’t sure what he wanted, since I can’t always translate his quiet words, so I asked if he wanted to read to Grandpa John. I fetched him, and the two of them read the book from cover to cover. 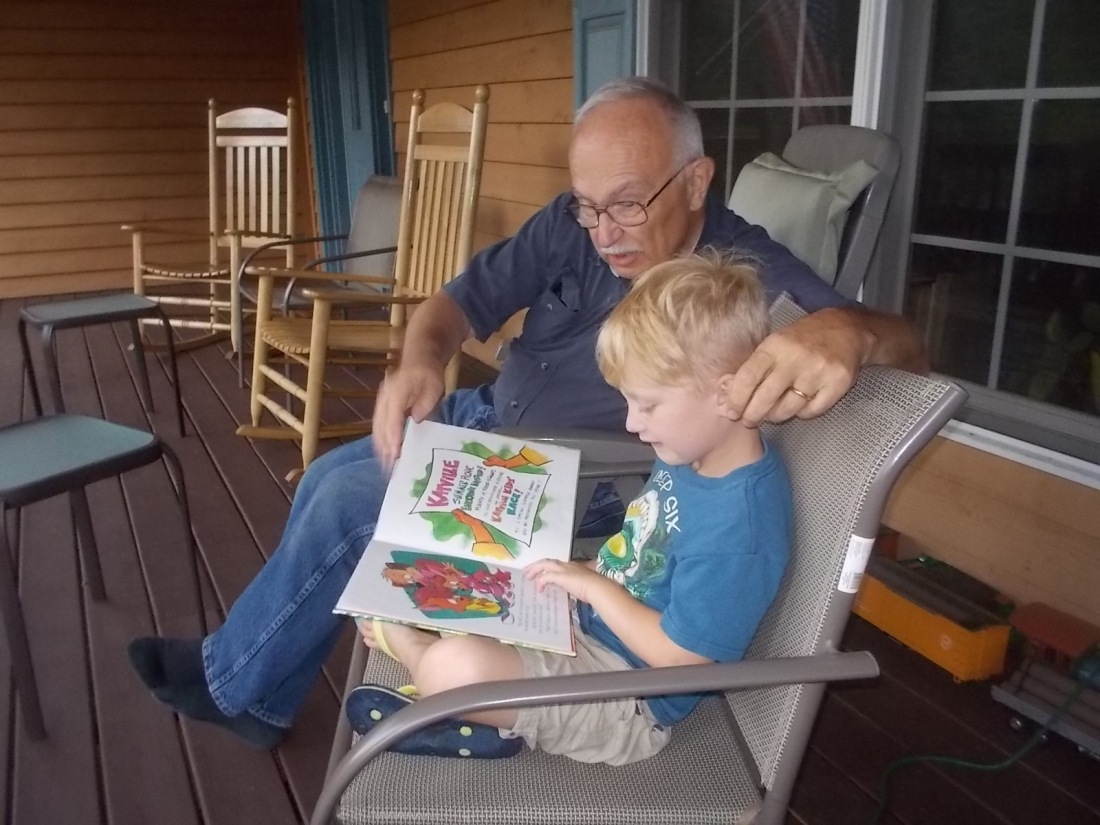 Logan’s mom gave permission for him to have breakfast with us, so we moved into the house. His eyes lit up when he saw David’s plastic structure on the table. He announced he had one, and so does his church. Soon there were rolling marbles everywhere! Amazingly, after he left, I found only one marble on the floor. He’s a neat kid in more ways than one.

Nathaniel almost burned his tongue on hot coffee, which amused Logan. I asked for a repeat so you could see how much Logan enjoyed that.