One woman asked a question of a small group in Asheville, “Are you ready for autumn?”

Nobody admitted to being ready. Normally I would have replied enthusiastically, but I kept quiet. The only answer was from someone whose favorite season is summer. She had more hot-weather things she wanted to do. I’ll bet she didn’t grow up in the South when the only air conditioning was in movie theaters and ritzy department stores. I’m sure that is what cured me forever. Given the chance, I’d vote for a three-season year and relegate summer to the hottest place of all. Then why was I not speaking up for fall? The rest of the nation had one of the hottest summers on record. Our son, also in the mountains, said Hot Springs became unbearable. Sizzling air pressed down on the little town that the Appalachian Trail runs through. He thought his mountains kept cool breezes up in the sky. The sad truth is I hadn’t filled my quota of complaining about the heat.

Several times I’ve read that women have a biological need to use a huge number of words per day, and the requirement for men is much, much lower. In like manner, it is evidently in my genes to complain bitterly about hot weather. I’m guessing I used to spend 21 hours a year fussing about summer heat. That’s an elastic estimate based on an hour a day for each unbearable day of horrific heat and horrid humidity on Long Island. We moved from living at sea level to thriving at 2,600 feet above it. That’s living the high life! Although Hot Springs was a grand spa town back in the day, it is quite a bit lower. Son John $ had reason to feel depressed under that heat.

The newspaper was full of dire statements about the awful heat across the nation. We didn’t feel it in Jonathan Creek. We ran the air conditioner a few hours on the hottest days, and the rest of the time we kept windows and doors open for the cool breezes. About two weeks ago the temperatures began to go into the 60s and then the 50s at night. What was there to complain about? Nothing! And that was my problem.

There was an article about leaf season in the local newspaper. The writer claimed trees were changing, and we were in the prime area to view it. John and I noticed several trees with yellowed leaves up on the mountain behind our house. Wanting to take advantage of the season, we drove on the Blue Ridge Parkway. There should be no better way to get in the mood for fall than to see leaves changing. We commented that all we saw was green. Just then we rounded a bend and found trees with clusters of bright red-orange berries. What a lovely sight! I knew they had to be mountain ash trees. There were lots of them at that elevation and none anywhere else. Yes! I’m through with complaining and ready for autumn! 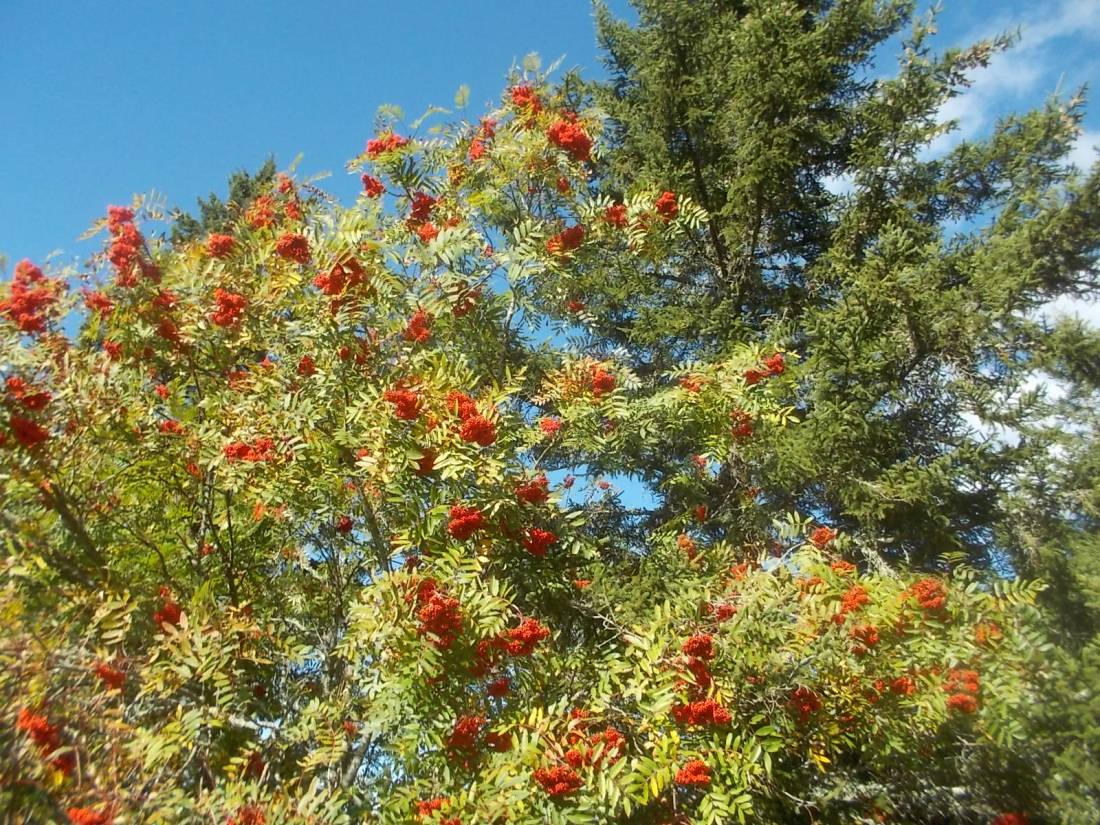 What about you?  Are you ready for a change of season?