John’s sister Barbara and husband Thom arrived about six hours after we got back from the baptism of their grandson in Maryland. Our first meal together was breakfast, out on the screened porch, as usual. What was different was the temperature. It was so cool that I brought out sweaters and lap robes. Thunder rumbled; rain followed, and we sat there visiting.

When it cleared, we headed for Cataloochee, stopping at a great lookout on the way. One of my favorite things to do is to get out of the car to feel the breeze and smell the fresh mountain air. A couple from South Carolina joined us at the railing. Son $ engaged them in conversation, something he does brilliantly. The way he looks and talks puts people so much at ease

that they begin to tell him their life stories. I walked over to Barbara, a linguist, and suggested she might want to get closer to hear their speech. She did much more than that; she recorded them. I enjoyed picking out things that I wouldn’t say, even though I have a Southern accent. The woman talked about “goin’ up air” which translates to “going up there.” $ also corrected their information, that people in Maggie Valley where they are staying, said there were no bears around. There most certainly are, and they should be aware of their surroundings at all times in the woods. A few weeks ago a 16-year-old boy was dragged from his hammock as he slept, and his dad was finally able to get the bear off by punching him in the eye. 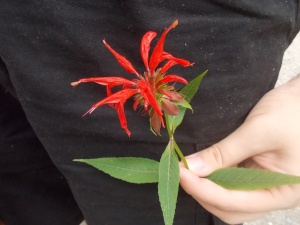 I had been watching for the rhododendrons to bloom at higher elevations, and I was rewarded. $ spotted a wild flower we didn’t know, bee balm or wild bergamot. We took pictures of the red flower and wanted to make tea with it. He said we’d need a lot of blooms, and we weren’t going to pick all of them in that one area.

to wander through. Barbara headed for the stream, and Thom said, “Don’t encourage her.” She is an adventuresome person. A few minutes later I said to Thom, “She’s got one shoe off.” One of us dared her to wade across the stream rather than taking the wooden bridge, and she was off. Kate whipped out her phone and took a video, while I went to the other side to get a still shot.

Just across the road was an old barn which others explored. I stayed outside to get a picture of them. We hoped to see elk grazing in an open glade, but we spotted only one young one close enough to the road that others took a photo of it.

There was a two-room schoolhouse to walk through. My 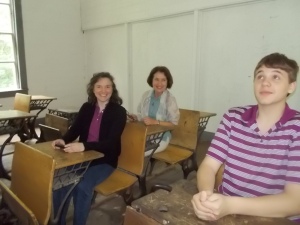 mother taught a year or so in a school that small in the late 30’s. We looked at patched holes where stoves had been and sat in the desks. My fifth grade desks looked just like that, only we had five rows. I sat in the back desk in the middle row, which was one desk shorter than the others. (For classmates, that was Mrs. Eidson’s room.) The old windows would have been propped open with wooden blocks attached to the side of the frames.

It was 2 p.m. by the time we drove out of Smoky Mountain National Park. We headed for a restaurant with the area’s signature food – barbeque. Pulled pork and brisket were our choices. The waitress was full of fun, teasing Nate. I don’t remember how it started, but she said he could wash dishes to pay for his meal. She seemed surprised when he pursued it, wanting to know how many hours he’d have to work. It was one thing after another as we laughed our way through the meal.

Barbara is always eager to walk, and I should be. I suggested we take a quick stroll beside the stream at

the rec center. John opted out because he hand was tingling from angina, and $’s ankle was hurting. Thom stayed with them in the shade, while Nate and the women walked past the skateboard area, fenced dog park, and children’s playground. Just as we turned to go back, two women and two children lugged a two-person raft to the stream. We watched as they put in at a low place, and the boy and girl got in with their paddles. We were walking faster than they were floating. When they lost an oar, we watched to see if they were able to retrieve it. They caught up to it when it hung in a low branch. We would have been through with our walk much quicker if we hadn’t hung back to see what would happen when they came to a small waterfall. The whole time we were both pleased and apprehensive that the adults left the children to go it alone. We rejoined the others and came home, not knowing how much further the children would float.

Dennis came across the street to play backgammon with $ and Nate. Thom took $’s place, and they played long enough that Dennis’ folks called for him to come home. The Brownworths wanted to record John repeating some of the stories his dad told him, saying Dad didn’t share his war stories with Barbara and Chris. John said he spoke into the recorder for 45 minutes. We were sorry to see them go, but they had people to see, and we have a daughter and grandson to enjoy. Family times never seem to last long enough.