We were celebrating independence but ruled by rain. We read that there would be activities in Waynesville, so we drove down Main Street. There were lots of people walking about and several musical groups playing on the sidewalks. We also saw signs for a cookout. It began to rain. We kept driving. Fireworks were listed in the newspaper, but with our luck, they would be canned if we showed up.

Cooking meats on the grill was about as close as we could get to doing something traditionally American. John and Nate 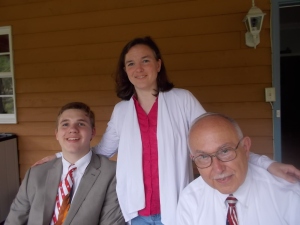 grilled apple sausages, turkey hot dogs, and turkey burgers. We also had squash from neighbor Joyce who shared produce from her first garden in 30 years. As always, star billing went to Uncle Walter’s potato salad recipe. Uncle Walter, John’s godfather, had the recipe from a cousin who owned a deli. It’s a little different every time, but always delicious. I put together some chocolate chip bars while the squash was cooking. Kate has been with us a week now, and this was the first time I baked. Her eyes lit up when she saw the pan cooling on the counter.

John could have provided us with thoughts on fallen heroes of the 1770’s, but we didn’t delve into history. I took care of fallen heroes in the garden – glads that toppled to the ground after all the rain we’ve had. I wouldn’t normally cut flowers to bring inside, but these would never have pulled themselves upright. We’ve talked about them on the porch, so they should know they are loved and appreciated. 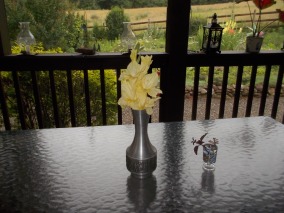 Another round of rain came and went. We planned to watch fireworks on TV, but when booms sounded up the mountain, we sat on our porch and enjoyed the free show.

2 thoughts on “Fourth of July”