I had to apologize a few weeks ago when John offered to take Amy and me to get a milkshake.  We had walked through the gardens at Biltmore, and he knew Amy always had a chocolate shake every time she went there.  I knew Amy more recently said she was on a diet, so I quickly spoke up and said we should not indulge ourselves.  I was wrong.  At the time, Amy said her conscience had spoken.  Not being a quick thinker, I didn’t get the real meaning of that until the next day.  Wet blanket Anne had indeed spoken the truth, but I began to suspect a shake was what the two of them earnestly desired.  If only I had had second thoughts immediately!  When asked pointblank, Amy admitted she would have snapped up that offer.

Fast forward to the day John and I were out all day buying and selling cars.  After neighbor Bob got our Jeep started, John cleaned out all the pockets and compartments.  I wiped off the residue of cardinal from the mirrors and doors.  We drove to South Carolina to Carmax.  The folks there appraised the Jeep while prepping the used Honda Odyssey we’d picked out the day Gerhard came to visit.  I was hungry when we began, so you can imagine how high the hunger thermometer was when we drove away hours later.  We stopped at the first interesting sign we saw for Joe’s Crab Shack.  John ordered sensibly.  If your imagination is in good form, you’ll know my conscience had already fainted from hunger.  I had the works –shrimp, hushpuppies, and fries.

As we drove on toward Asheville, John asked, “Would you like to stop for a milkshake?  We couldn’t find a Sonic yesterday for their special, so we could detour and get one today.”

I readily agreed.  However, by the time we got there, my shrimp seemed to have assumed the proportions of a pod of whales.  I could not have swallowed another thing and said so.  I think John grumbled under his breath.  An apology was forthcoming from me.  Surely I urged him to indulge himself, although I can’t pull a quote to prove it.  We drove on.  I shifted in my seat, trying to give the whales more room to swim.  Hours later John said something about feeling like Amy, gypped out of a shake.

Good grief!  I had been miss-shaken not once, but twice!  Now I owe them both, big time.  Does anyone know of a place to get supersized gallon shakes?

Below is a photo of John and our wonderful college kid salesman, Deven.  Carmax makes the most of a sale, dolling up the car with a huge yellow ribbon.  The official photograph of us  is still in Deven’s cell phone. 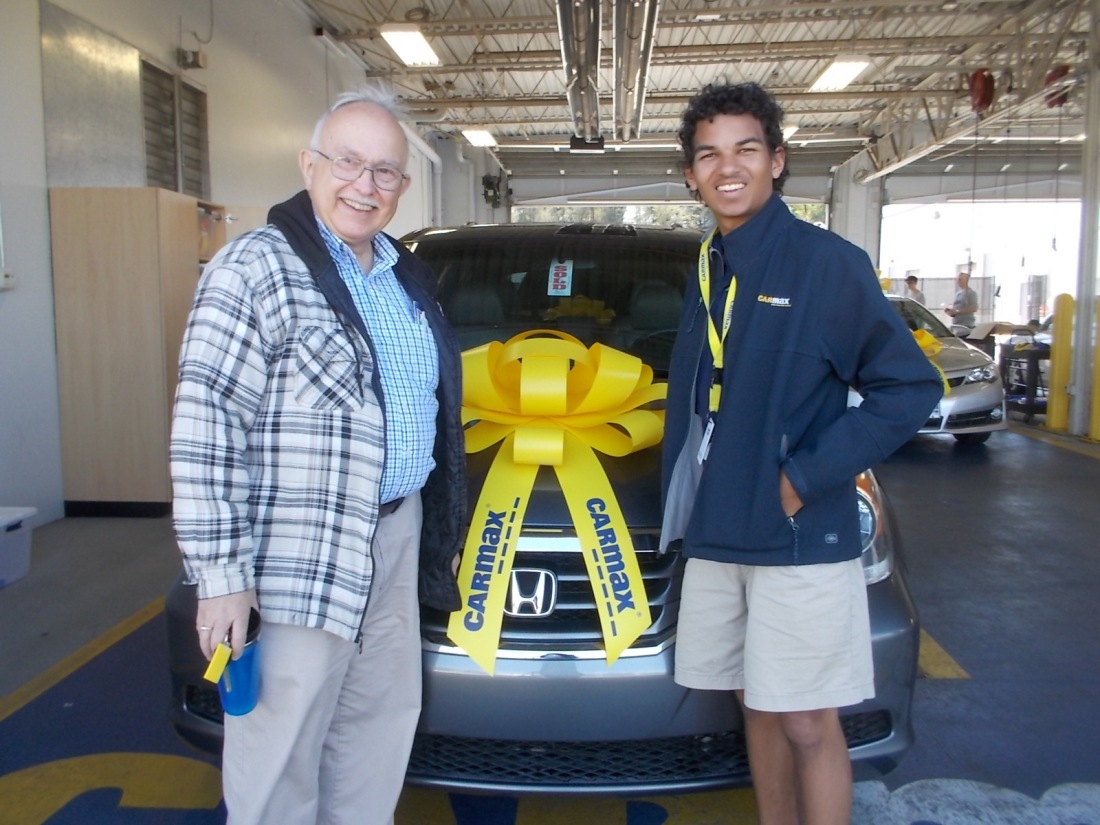