I did a little gardening before we left on our weekend trip. I put the hoe down, and we headed off the mountain to Lowcountry. What a contrast! Instead of four, there were seven of us, and we TALKED. Not only did we talk, but we did sightseeing around Charleston. John’s sister Chris and husband Steve moved there about a year ago. Each time we visit them, they have suggestions of things to see and do. Our grandsons, David and Nathaniel, had not seen their house before. They loved the home tour which ended in the tree house at dusk.

We met lots of new people at church and worshiped with a couple of old friends from our former church on Long Island. Chris and Steve go to the same service they do. More on this later.

I was excused from the Sunday excursion because of the heat and humidity, but Chris went with John and the boys to tour the Yorktown aircraft carrier and the Vietnam War memorial. 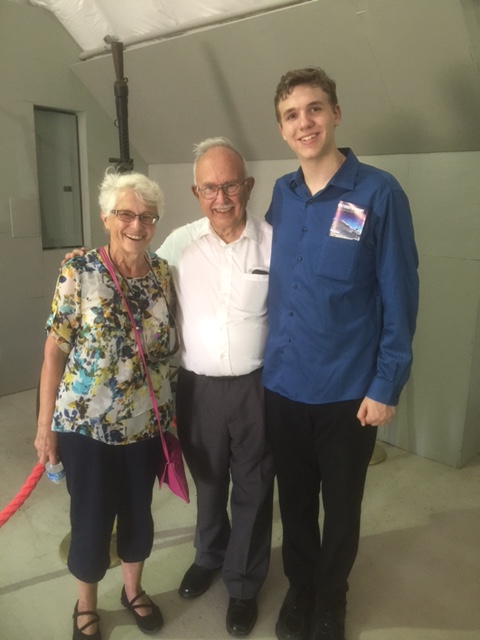 I have no pictures of my pleasant afternoon. I chatted with Steve and their daughter Barbara, and Barbara took me on a tour of Summerville. My impression is that the town is now huge, but the old center of town is tiny. It has some vintage buildings with lots of character, but we didn’t brave the heat to explore. We did get out for the library. Barbara remembered that I’m a huge fan of libraries, and I enjoyed seeing theirs. People check in their own books at the door and check out others near the main desk, both streamlined operations. I was also impressed with the do-it-yourself reservation system. Books that had been put on hold were shelved near the front door, organized by the name on the reservee’s library card. I wondered if the system would block any other person from taking an item. That makes me seem underhanded! I wouldn’t STEAL anyone’s book!

Now, back to Nancy and Ken. They joined us for dinner, so we had lots of time to visit. I’ll post some photos, realizing that if you know them, you’ll want to see them. If you don’t know them, look anyway, because they are dear to us.

Chris pointed out the cut glass bowl in the center of the table. I was so glad David and Nathaniel were there to hear about it. The boys’ great-great grandfather used it for home baptisms. He was a Lutheran pastor and would use it if a baptism or christening were not held in the church.

The next day Chris took us on a harbor cruise in Charleston. The last time Chris and Barbara did that trip, there were scads of people crowding the boat. Being early, we could choose our seats before any of the other 13 people chose theirs. Fort Sumter would have been much closer if the tide had not been low. It was still impressive.

We went right under Chris’ favorite bridge, the Ravenel. The name has three syllables, not that you would pronounce it the way I was tempted.

I have no photos, but I particularly enjoyed watching many pelicans and laughing gulls swoop about the boat. Pelicans were new to me, but I had seen a few laughing gulls on Long Island.

Charleston was not overcrowded with tourists before noon on a Monday. We found a metered parking space just feet from one of the good eating places for which the city is known. The Noisy Oyster was a fun place to eat, and we all enjoyed our choices. John had oysters, freeing the rest of us to choose anything we wanted. I had a lowcountry side, red rice. It had a good kick to it, so only two others tasted it. I had never seen a fillet of salmon served with a burger. David said it was delicious.

We squeezed in a swim before heading home. David delighted in being in the water, but I suspect the dog Mia had the most fun. She tried to bite water when Chris flicked some toward her. All too soon it was time to drive back to the mountains. We took many good memories with us.

2 thoughts on “Hoedown to Low Down”