We had a marvelous weekend in Stony Brook, and now it’s time to say goodbye again. John went for bagels to take back to NC while I visited with Tom and Dennis. We couldn’t help noticing two halves of a shrink wrapped building in the parking lot near the beach. When Tom asked Dennis about it, Dennis had the scoop. They were waiting for the crane that would lift it onto the foundation where an older house had burned last year. Dennis, with his daily visit to the firehouse, always knows what is going on. If his arm had been resting on the open window of his truck, I could have put two fingers on his wrist and felt the pulse of the village there.

Our Jeep was in the parking lot when Tom and I walked back. I thought there was a cat under the vehicle, but when it moved, I saw it was John’s feet. He was stowing the bagels in plastic bags. Bandit a

nd Bravo hopped in Tom’s car, and we had show and tell. Tom always has some antique with an interesting story. Today he had a brass gizmo for making bullets, an egg beater, and a mystery gadget. I never thought to take a picture of that, but I should have. The object was made of metal – a short handle with a mesh of metal links attached. Tom explained it was the forerunner of a Brillo pad. People used it to scour the bottoms of big cooking pans. Tom said the egg beater was a gift, one that I’m thrilled to have. We’ll display it somewhere in the kitchen.

Tom let John hold his massive Sargent catalog for the current exhibit at the Met. My nose began to twitch as he flipped through the pages. I could smell the strong odor of onion and garlic. How embarrassing! Tom might need to fumigate the book now that it has been infused with the essence of everything bagels. Sorry about that, Tom.

We took another shot of the activity in the village before hurrying back to the motel. John needed to drive out to the train park for something. If trains were like drugs, he would be going for a fix.

I took a quick photo of the Hercules pavilion and will include a peaceful scene from Setauket harbor. I’m happy that we can visit the shoreline and that I don’t have to choose between mountains and sea. 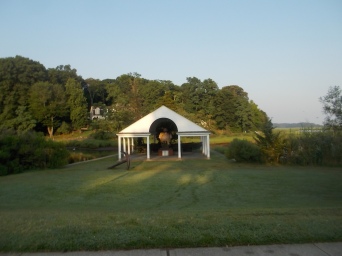 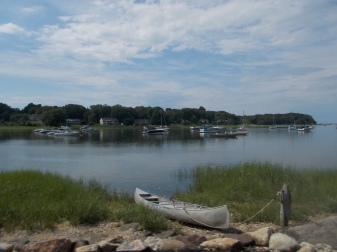