We saw the people we planned to see on this trip, and now we are heading home. John’s Uncle Howard was in great spirits, but we don’t think he remembered we were coming. It took him a while to know who we were and get us sorted out in his mind. He is 97 years old, so he can be forgiven for taking his time. He still has a clear memory of the bombing of Pearl Harbor where he had a ringside seat. There are only two other Pearl Harbor survivors in Memphis. 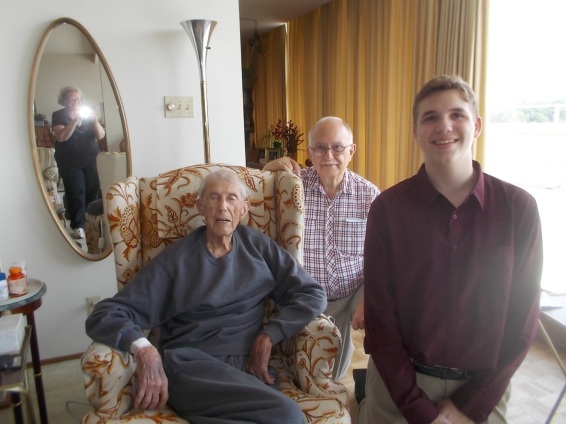 I rather liked that photo because I knew when I took it that I was visible in the mirror.

I was embarrassed that I nodded off several times. We brought in ribs and barbecue sandwiches from Howard’s favorite BBQ place, and we were all as full as ticks. In addition, we were facing the sun streaming through floor to ceiling windows. The difference between squinting and sleeping was about 1/8 inch. I apologized to John later for not being able to stay awake. He said, “That’s OK. We all nodded off from time to time.”

We stopped in Jackson to see Mary and Joe. Joe and I grew up in the same town, but Mary is the one I keep in touch with. I asked how she heard about Union University where they met, since she lived 5 or 6 hours away. It seems a good friend from her town went there a year ahead of her. She voluntarily promised her parents she would come back home; she would not fall in love and marry anyone far away.

She started college, and sometime later her dad telephoned her and asked how her love life was going. She said, “There is nothing to worry about. I’ve dated this guy a couple of times, but we don’t have the same values.”

As soon as they hung up, her dad said to her mom, “We’re going to Jackson this weekend. Mary has met the man she’s going to marry, and I want to check him out.”

I think Mary said they have been married 48 years.

While I was enjoying Mary, John was talking to Joe. I doubt the two men had ever spent more than a few minutes together. John learned a lot about Joe’s dad in the war and about Joe himself. Nathaniel said he was tired and didn’t plan to talk. He was quiet, but he became animated when Mary chatted with him.

It was wonderful to reconnect with these dear people. We will drive hard tomorrow so that John will be home for cardiac rehab on Monday.