When Chrissie and Chris drove off, the house sighed. I felt the ceilings seemed a bit less tall because a lot of exuberant life had left. Thank heavens son John $ stayed a bit longer, so that not all the air went out of the house at once.

$ took Chrissie and Chris on a mountain hike. Their repeated comment about the 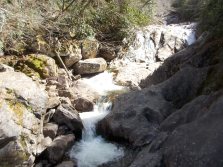 excursion was, “Perfect.” You can’t improve on that! The only warning I heard ahead of time was that there was a stream they’d have to cross. Since the water was fairly low, they were able to cross on exposed stones and didn’t get their feet wet. They saw breathtaking views, streams, and waterfalls.

Chrissie said, “The blisters on my feet didn’t come until we were very near the car.” 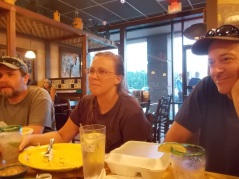 We had dinner at $’s and my favorite Mexican restaurant. They live in a rural area upstate New York and rarely have a chance to eat ethnic food. I am the double beneficiary, inheriting Chrissie’s box of leftovers. If only they had been here longer, we could have found Indian cuisine and a sushi place!

One of the first things Chris and Chrissie said when they saw our porch was that they wouldn’t mind sleeping there. Chris lived part of that dream by sleeping on $’s porch one night. $ lives on the side of one mountain, with a fantastic view of another from his porch.

I was excited to find Chris would eat the local specialty, livermush. That was on the menu for breakfast, along with bacon and sausage that the others would eat. Chrissie had the perfect answer when Chris asked if she liked livermush. She thought a minute and said, “I would eat it in someone’s home, but I wouldn’t order it in a restaurant.”

The travelers were heading for Pennsylvania before going back to New York. We let them go after extracting a promise that they would come back.

4 thoughts on “The House Sighed”