My brother Bob and wife Beth came for a quick visit to see the autumn colors in our mountains. I made them pose before a sourwood tree, one they identified for me that I’m trying to fix in my memory.

In a big loopy drive, we went on the Blue Ridge Parkway, drove through Cherokee, and came back on another section of the parkway. The weather was a bit rainy, making some of the scenes rather dark. We have memories of lovely fall colors that don’t exactly match our photographs.

As we drove past the Hemlock Inn, Beth and Bob said they had stayed there once. They told the story about playing a word game that night with the group, something similar to Scrabble.

Beth asked, “Is dogly a word?”

That made everyone burst out laughing. Bob felt that made his long-ago graduation from seminary very worthwhile.

Rain was falling when we came home. Beth stepped onto the back porch to see how our garden was faring. She has advised me on gardening from time to time, and this summer she and our grandson Nathaniel dug up all the iris bulbs and replanted them. She could see the new growth, a healthy circle of green blades. We noticed a brilliant rainbow on this side of the mountain. Beth said she’d never seen purple on the lower edge of a bow. The proverbial pot of gold should have been in the horse pasture, about equidistant from Joyce’s house and ours. We went outside, Beth looking at this fantastic scene while Bob and I tried to capture it with our cameras. We had been looking for beautiful sights of the season, and the most dramatic was in our own backyard.

The acorn squash we had for dinner was a show stopper. I realized as I cut it that Beth might not like it. She can’t abide pumpkin or sweet potatoes. Would this pass muster? She insisted she would try anything put in front of her. John and I liked it last week, baked with a little butter and molasses. Beth tasted it and said, “This squash doesn’t taste nearly as bad as I thought it would.”

We laughed, and she extended her statement to say that it was good, good enough that she would eat her whole portion.

The next morning the temperature was 42 degrees at walking time. Beth opted for a bit more sleep, but the rest of us set out. I took the usual photo at the creek where the guys were still bundled up. I had already taken off my windbreaker and put it back on. The wind in the valley was intent on chilling us.

Bob expressed interest in a saw John pointed out halfway down the steep hill. I suggested we stop to look at it on the way up when I would need a breather. The rough workshop has been producing outdoor wood furnaces and cutting big trees into thick planks. The fellows were looking at the saw when I snapped their picture. John looked for the blade and commented that it was a big band saw. I nudged Bob and said that was just the thing! He plays trombone in a retro group with a big band sound.

We drove to Cataloochie, the closest part of the Great Smoky Mountain National Park to us. We knew the scenery would be good and hoped to see the elk in the high meadow. The road was good in places, but part of it was gravel and only one and a half cars wide. This was a real mountain road that wound up and down to get over the ridge. We stopped at an overlook where a kind young man offered to take our photo together.

There were lots of vehicles parked in the meadow, and sure enough, the herd of elk was there. They stayed in the field, and the humans stayed on the road, although some had lenses that made their cameras look 15 feet long. If I were the elk, I would demand more privacy. 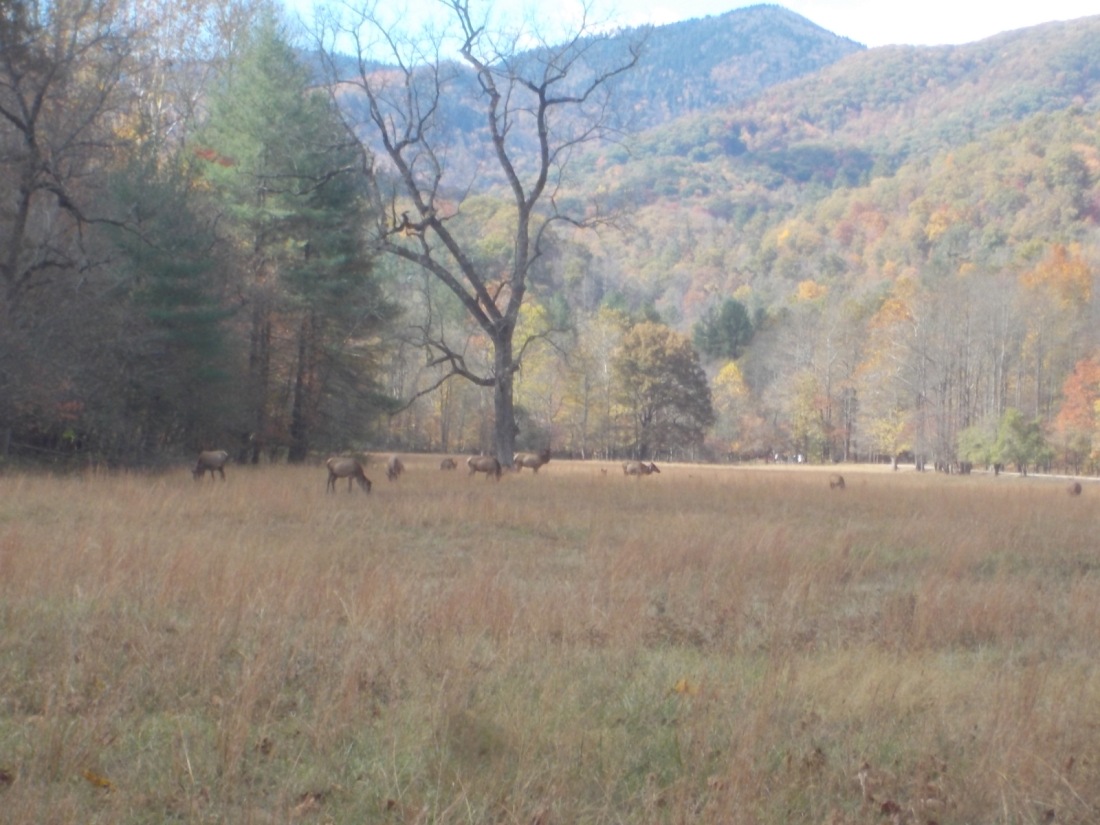 19 thoughts on “Beauty in the Backyard”