Our friend Karen was here for almost a week, and what a delightful visit it was! The comment I expected to post here was that we never stopped talking. That’s what you’d expect to hear about a BFF. This visit was beyond non-stop chat. I wouldn’t pause for a nap! I often take my shoes off and get in bed for half an hour in the afternoon, mostly to freshen my smile. Karen-time was too precious to waste, so I kept my shoes touching the floor.

The day after she arrived, we tried to drive to Cataloochie to see the elk grazing in the meadow. The road in the park was closed, so we took a picture of a different animal. 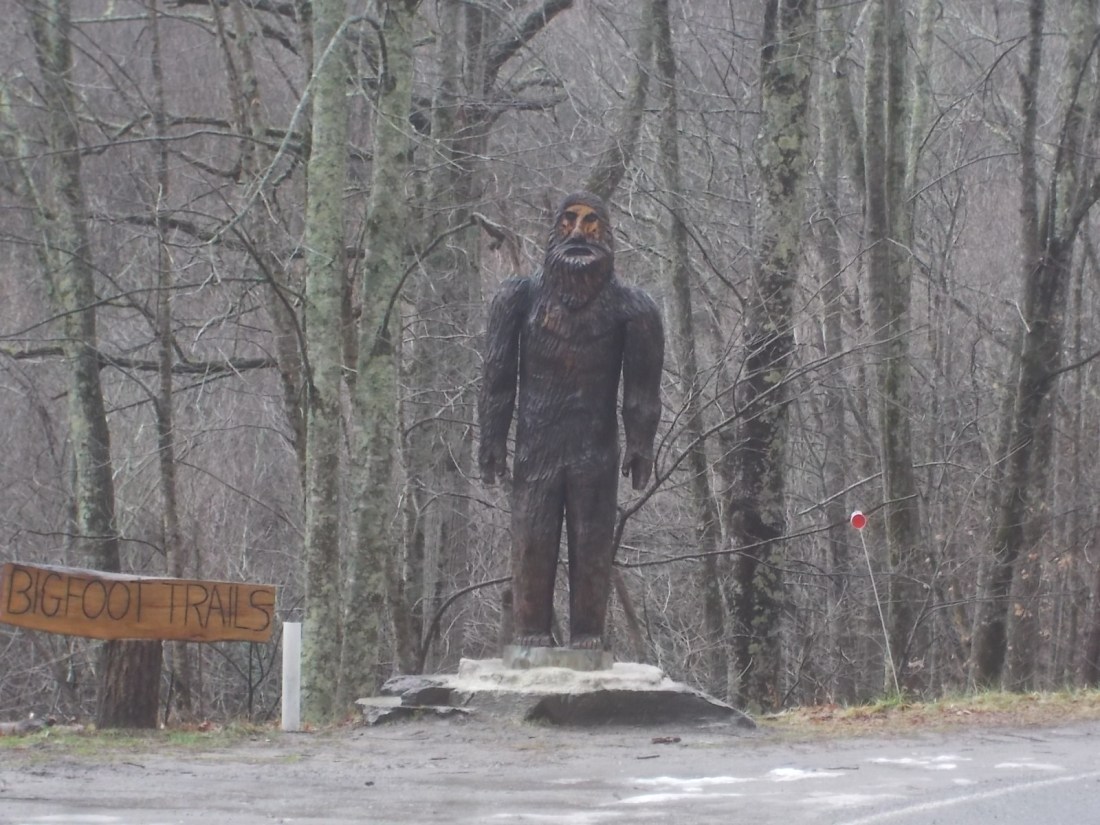 When we lived in New York, we began a tradition of having a repeat of our Christmas dinner with Karen and Al. The 25th was always spent with our respective families, so we got together a week or so later. They made appreciative noises over the chicken casserole, as well as the steamed Christmas pudding. For our first dinner of this visit, we had both. The casserole was freshly made, but the pudding was the remnant from Christmas. I pushed the bits together, heated it, poured rum on it, and was amused that fire came from every crevice. It wouldn’t go out, even when I blew on it. John smothered it so that we wouldn’t be eating charcoal. At least we didn’t have to get the fire extinguisher.

We walked to the creek where I took the obligatory picture.

The Vanderbilt mansion, Biltmore, was on the list of things to see. John and I had seen it with David all decorated for Christmas. We loved being there again, seeing staff dismantling the holiday glitter. The orangery was even more beautiful than before, with a simpler display. The picture for this should have been our tired feet. To traipse all about that mansion, upstairs and down, was a bit much after our 2.5-mile walk to the creek.

Knowing Karen likes to knit, I wondered if she would enjoy going to a knitting shop. That suggestion got an enthusiastic yes. She found two and gracefully agreed to pose before the first one after an initial groan. The little shop was crowded with colorful yarns, a group of chairs, customers, and knitting gadgets. We saw some very strange people in that area of downtown Asheville. It’s too bad the toy camera was not ready to record them. Thanks to Karen’s phone and my Garmin, we found a spacious, well-lit shop further out from the city center where there was free parking. I asked which place was better. I would have voted for the bigger, newer one, but what did I know? Not much, judging by her answer. The crowded little shop was her favorite. The selection of yarns was better. If there were fine points listed, I missed them.

For future visitors – be careful with your comments, because I clobber people with kindness. Karen told us she loves barbecue, and I asked if she would want it every other day. She laughed and agreed. She and John had it at Due South in Virginia and at Bonfire not far from our church. Haywood Smokehouse was her favorite after Due South. When I printed a coupon for Dicky’s, we sensed she was not quite as enthusiastic as before. She didn’t roll her eyes, and she didn’t complain, but I think she was relieved when I said I’d cook after church. Karen ordered a brisket sandwich at the Smokehouse and pronounced it delicious.

I wanted a good photo of her the day she left. An added bonus was that it showed a sweater she had made herself. Isn’t it gorgeous? I am not envious, because I tried knitting about 47 years ago and knew better than to repeat the experiment.

After we took Karen to the airport, I came home and took my shoes off. That nap was just the restorative I needed. She landed when I was writing about the knitting shops.

17 thoughts on “I Never Took my Shoes Off”