As we backed away from the house, John said, “I hear something dragging.”

I hadn’t noticed, but we both got out to look. A piece behind the front bumper had dropped down and was scooping up gravel. John was wearing a suit. It would have taken me half an hour to get on the ground, and there was no guarantee I would see how to fix it. Getting John to church to sing in the choir seemed impossible. You could probably have heard our brains grinding three feet away. I voiced the quick solution – let’s see if Bob is home. Shawn was watering their lush grass, and she relayed a shout for Bob. Superman couldn’t have changed his clothes and been on the spot any sooner. He took one look, dropped to the gravel, and pushed the piece back into position. Adding washers would hold it more firmly.

He said, “I’ll do it in the morning. Take our car to get to church.”

Wow! Neighbors like that don’t grow on trees! You can see why we think they are super special. We got in their sleek car and sped to Asheville, arriving in time to rescue the pastor. Rescue is the wrong word, but I suspect someone backed out of reading a section. Pastor McFarland greeted us across the Narthex as he hurriedly thumbed through the bulletin. He found the place where the choir was to sing, saw that John could be in the congregation when he needed him, and asked John to read the question parts of the bidding prayer.

The congregation was asked to enter the sanctuary silently for the service, giving John time to scan the reading several times without interruption. I thought he did it well. The choir sounded good, too. In many church choirs, women’s voices overpower the lower parts, but I could hear the four lines clearly. All this was thanks to Shawn and Bob’s generosity. I’d like to give them the Golden Hero Cape award for their quietly spectacular rescue.

The church looked somber, draped in black. I never saw details of our last church, because I was always in the choir loft. Here the crosses, altar, baptismal font, and pulpit were covered. We left this solemn service in reverent silence, knowing the greatest rescue of all time happened outside Jerusalem over 2000 years ago. 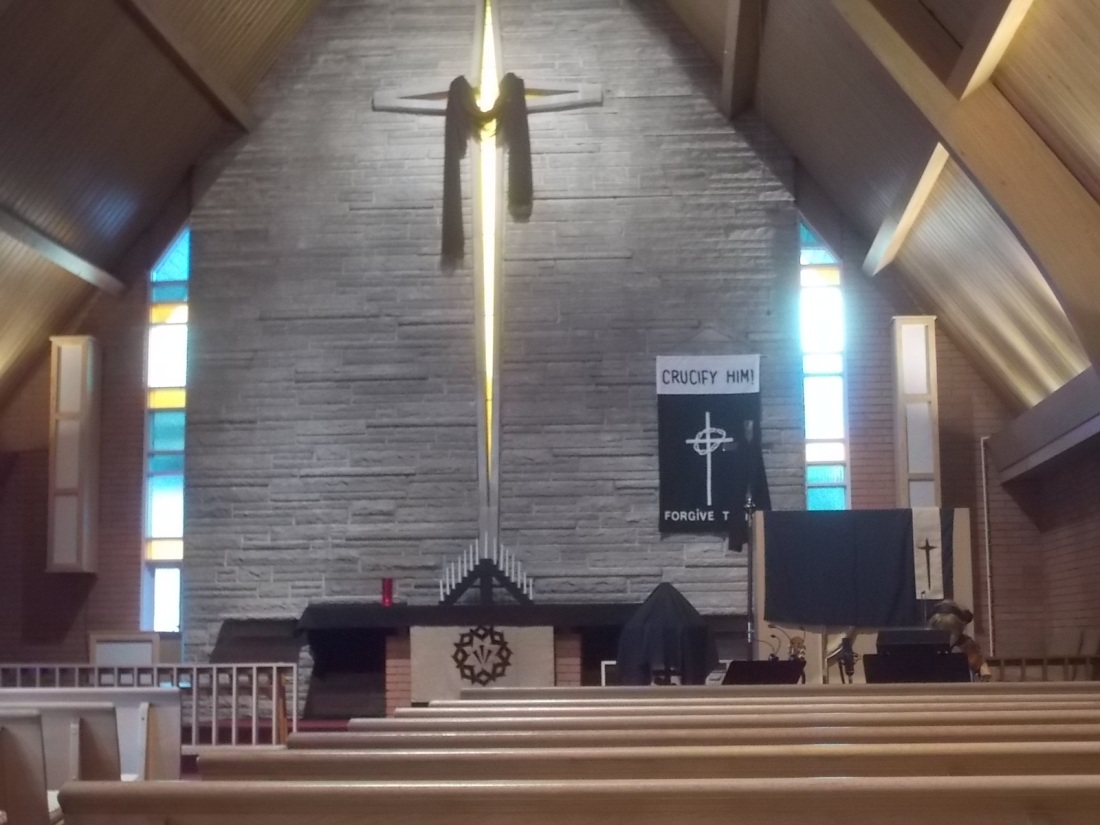