As you might guess, my unwelcome visitor was not a human being. It was our harbinger of Spring, Mr. Robin. We’ve seen many robins the last few days, and I accepted them peacefully at first. From another room I heard thumping and checked the front door to see if a neighbor was there. No one was on the porch. The next series of thumps led me to the sliding glass doors. A filthy robin was hurling itself against the glass, leaving watery poop oozing down. I did NOT take a photo, but I did wash the doors immediately when it was one degree below freezing. There are eleven splatters of poop below the glass, so I’ll be taking a giant step forward when I go outside. I’d love to flash that bird with a huge picture of an owl, or whatever else would frighten him. Nasty bird!

I have a new system for catching up on blog-reading. My choice is always to be with living people over recorded messages. Blogs will wait patiently until I am alone. I chose to spend every possible moment with our friends Karen and Al, who were here only 62 hours. John delivered them to their home after a sleepless 13 hours of driving. It’s good that John didn’t sleep, but they stayed awake through the night, too.

It would have been discouraging to count the posts, so I scrolled down to the last one I read. My new system is to read five posts each time I change activities. I needed a plan to keep track of those read. For the record, I can still count to five, but I can’t remember which number I’m on if I wait three minutes between numbers. This sounds like the beginning of a dratted story-problem, doesn’t it? Relax, it isn’t. Scattered about my messy desk were five items. I put them to the left of the keyboard, moving one to the right each time I finished reading a post. 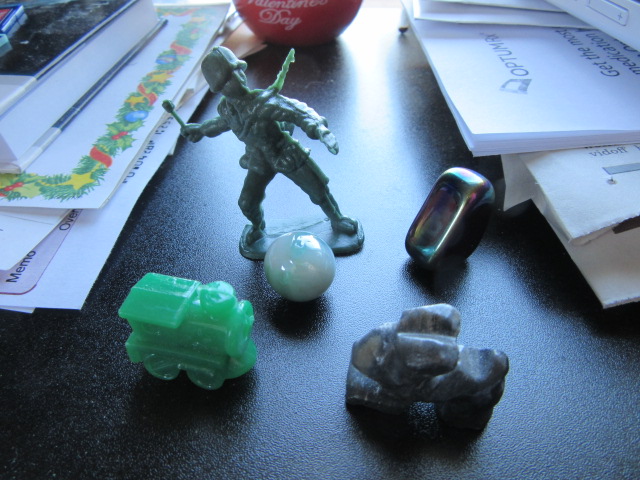 It has been fun to use these little dust-catchers mementos. The train and rabbit came from our trip to Colorado. I bought the polished stone in Dillsboro NC and picked up the free toy army figure at a pottery in Tennessee. The fighter is to remind me to pray for our military people. The marble belonged to my dad. I have no idea how it landed here, but it can’t be contained easily – just like him when he was alive.