We had instantly-melting snow last night, so I didn’t expect to see anything unusual today. The mountains are trying to teach me to take nothing for granted. We set out for Tennessee on the interstate highway. There was rime ice on some of the steeper mountains. It was a bit late in the season to see it, but you can’t argue with wind, moisture, and low temperatures.

We easily found the church in Sevierville that John had discovered on line. We were skipping church in Asheville in cheerful protest. They were having a bluegrass concert instead of a formal worship service. We heard the group last year, and it was excellent. Our complaint was not against the band, but about calling a service “liturgical worship” when there was no liturgy. We were welcomed as we walked in. Glancing at the bulletin, we could see that every part of the service was there. Most surprising was hearing the pastor and congregation chant it. Wow! What a reward for our drive over there!

Neighbor Marla, who used to live in that area, suggested several restaurants we might like. She knows we prefer locally-owned eateries. Holston’s Kitchen was excellent. We ate leisurely and headed home on the back roads through the Great Smoky Mountains National Park. This was now mid-afternoon, when you’d expect all traces of yesterday’s weather to be erased. We could see whiteness on a distant mountain, wreathed in clouds. 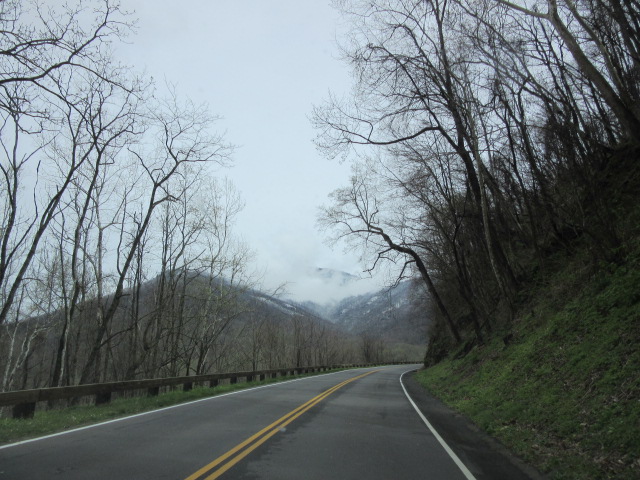 As we drove upwards, ice from the trees began falling on the car. 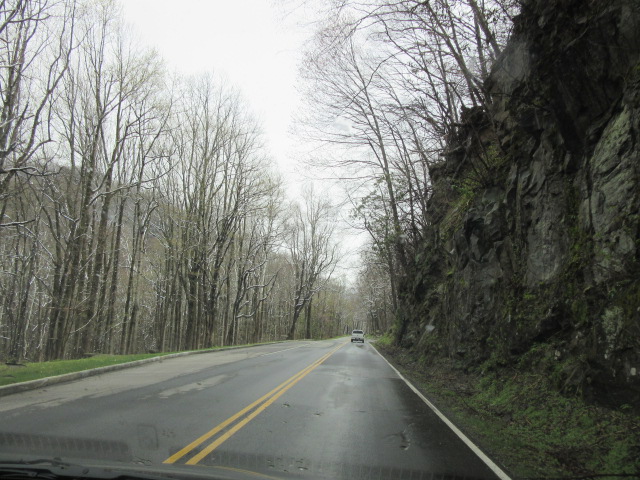 Traffic came to a halt, and we soon saw there were three small bears playing in the woods. Every car paused as a hand extended, holding a cell phone. John dutifully waited for me to aim my camera. Although I had zoomed in, you can’t really distinguish bears from the black spot in the picture. They were very cute, paying not a bit of attention to the big disruption on the road.

We were heading for Newfound Gap. John drove into a pull-off area so that I could get a photo of the wintry scene. Icicles were hanging from the road sign.

The last picture was taken from our moving car, showing more of the ice and snow. 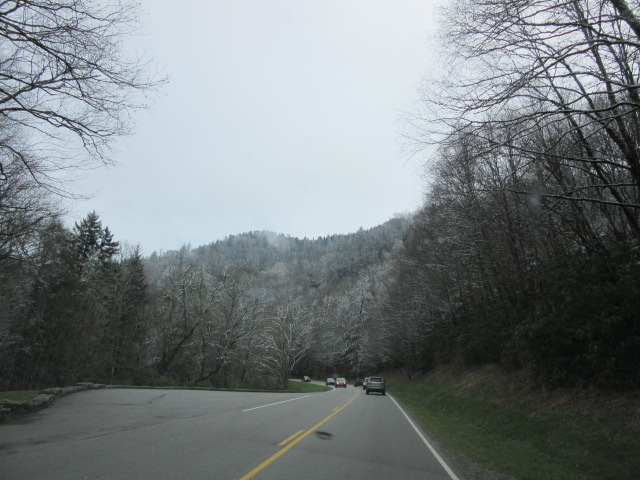 We had not expected a winter’s drive on the 8th of April, but we enjoyed the beauty all around us. As we came to lower ground, we saw little white wild flowers by the road and clumps of lavender blooms at the edge of the woods. Soon we were again surrounded by blooming red bud trees, tulips, and late daffodils. Spring is coming, as the weather takes two steps forward and one step back.