Our tall grandsons struggle to keep their legs and feet out of each other’s way at the dining table. It’s even worse on the porch where the table is narrow. They manage well while sitting straight to eat, but when we relax and chat, the fun begins. I noticed a year or so ago that the boys and John would begin to twitch a bit. Their poker faces projected the message that nothing was going on. Under the straight faces, shoulders might move slightly or muscles would contract a bit. I’ve learned to spot this subtle activity before anyone asks, “And where do you think your feet are going?”

They have perfected the art of non-verbal teasing. Most of the time they keep the conversation going, despite the foot-sparring. We were in a restaurant where we five squeezed around a table that would have been tight for four. I stood up to get a photo of the others to remind myself what a good time we’d had there. You can see how we were seated.

The twitching began as they waited for me to finish eating. Kate was giggling, but I didn’t realize what she was doing. She slipped out her phone and took a picture of the feet under the table. Her legs were clad in blue, and her feet were together. David’s black slacks seem to be hugging her feet. And the black shoes pushing against the wall? Nathaniel’s! 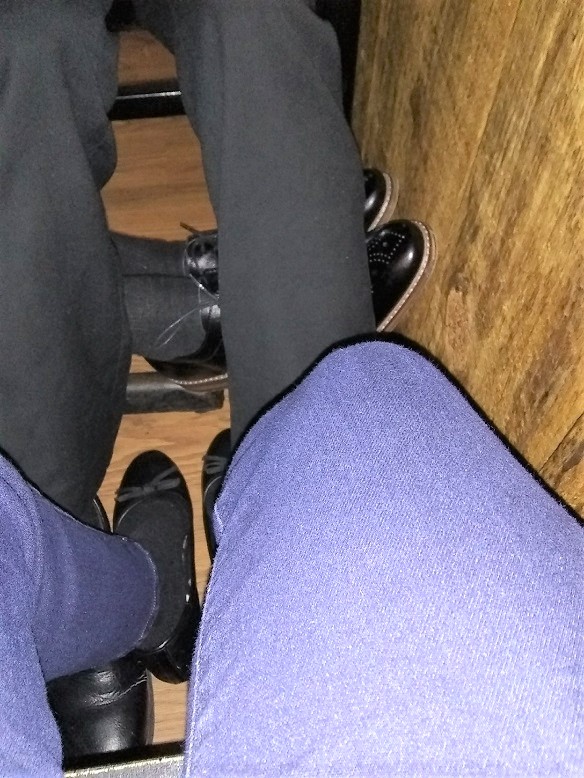 I hope I’m there to see it if they ever tie themselves in knots and can’t stand up.

31 thoughts on “Our Twitchit Family”