To celebrate John’s birthday, we went to the restaurant where grandson Nathaniel worked for the past two summers. As the camera came out, son John $ adroitly offered to take our photograph, thereby getting on his preferred side of the camera. I took comfort in knowing I could erase anything I didn’t like. 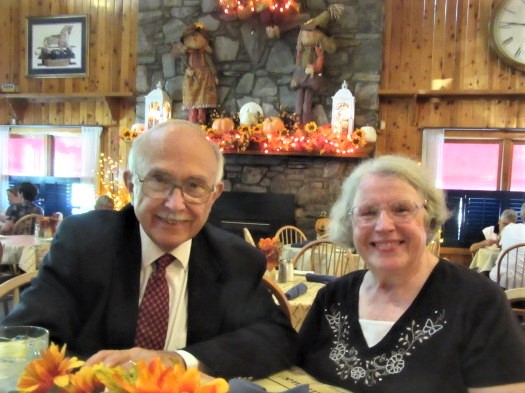 John likes that restaurant for one particular dish, which they do well. All their food is good, but I go there to bask in reflected glory. One of the owners generally cruises the dining room, and John lets her know we are Nathaniel’s grandparents. Last year she beamed on us and told us what a marvelous worker he was. This year she called over the other owner, and he joined her in praising our favorite chef-in-training. Their words were glowing, and I took in every syllable. I looked at my plate and took myself down a notch. If Nathaniel had been working there, he would have peeled the potatoes.

Later we had John’s favorite dessert, angel food cake with strawberries and whipped topping. As we sat on the porch, we told $ that we’d heard coyotes howling in the pasture the night before. We’d never heard them so close or so persistent before. Although we were not frightened, he assured us that no coyote had ever killed a human.

The next morning, John saw the single candle left from the night before and stuck it in a biscuit. It was his official birthday, after all. Normally I cannot do two things at once, but I did that time. I pulled out the camera to take a shot of this shady character, and I sang Happy Birthday.  $, right beside me, declined to sing. If you listen carefully, you can hear his silence.