For years I read about Charlie’s getting junior ranger badges from national parks as he traveled about the US on holiday. It became real for me when we went through the process with him. He has been to 28 national parks and received his 27th badge as we watched.

The Smokey Mountain park nearest us is located near the end of the Blue Ridge Parkway. Charlie put on his vest and hat before presenting himself to the ranger. What a reception he had! The ranger gave him a high five before they got down to business. We just missed the ranger’s talk for that park, and that is one of the requirements to get a badge. The next closest ranger station was in Tennessee about 25 miles away, and we could make it in time for the talk there. Charlie began to fill out the booklet on the way.

While waiting for the talk to begin, we went through the display area. I was excited to find the butterfly that I see all the time in our garden. Whenever I saw a lovely yellow one, there always seemed to be a black one close by. They were a pair! In this day and age, I’d be labeled a racist if I said it appeared to be a mixed pairing. Although I know they are Diana Fritillaries, I have no idea how to pronounce the Frit part. 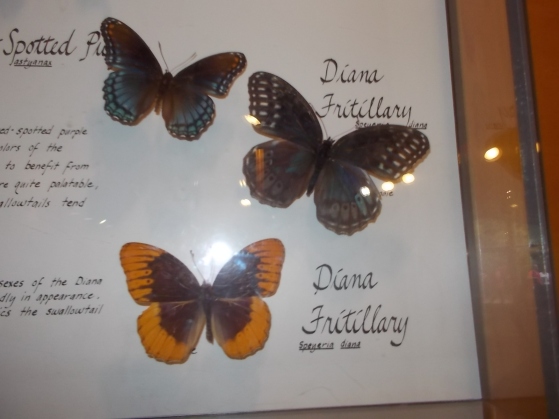 We sat on benches, boulders, and logs while Ranger Jennifer talked about black bears in the park. She shared with us the distance we should stay away from them, what a danger it is to leave food for them to scavenge, and how they trap bears that have become too used to humans. Most impressive was her walking around the group letting us touch a bear pelt. When a bear is killed by a car in the park, they keep the pelt for educational purposes.

Back inside, a ranger at the desk checked Charlie’s answers while telling the family how much she loves English people like Kate and Will. Keith, Charlie’s dad, commented that at least this one was up to date. The last person who gushed went on and on about Diana. The ranger fetched her hat before standing in front of the sign to have Charlie repeat the oath. He promised to take care of national parks and tell others about them. Charlie posed with his certificate, while his mother Christine held the sticker that was given to little Wesley. Charlie earned seven badges on this trip, and now he can relax. No more badges are on the schedule, and they will return to London next week.

The Junior Ranger program with our National Park Service is open to people from age 5 to 130.  Present cost is $2.50 for the booklet.  Christine says most of the badges have taken Charlie about two hours to complete.