The turkey and leftover sides were put away, so Thanksgiving came to an end. The end of the big meal was the only dish I photographed. It’s John’s favorite cranberry mince pie. I wish I’d taken a picture of Connie’s pumpkin roll, which was as delicious as it was pretty. 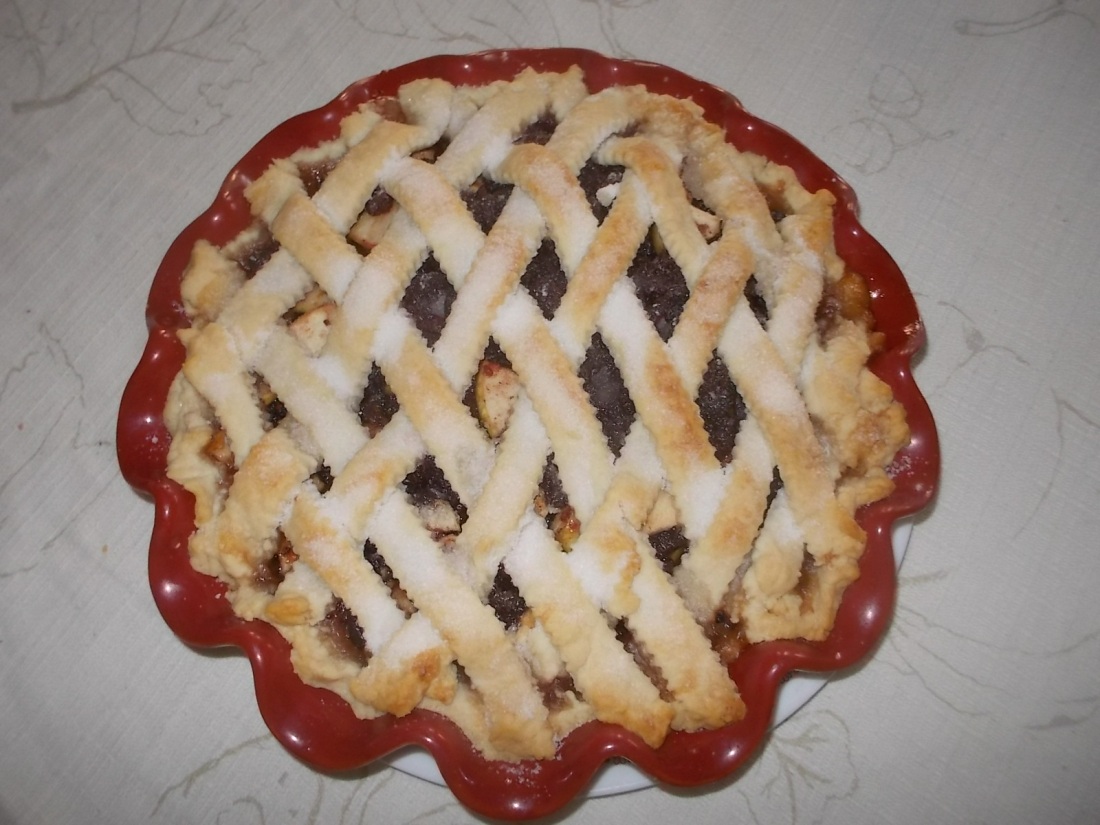 If I write one more paragraph about what a wonderful visit we had with family and friends, you’re going to think that’s all I can write about. I’ll tell about the reluctant guest in a minute. Here are two photos to show both sides of the table. John was included twice, because he needed double exposure to compensate for being slightly out of focus.

We particularly enjoyed hearing Marla tell about flying airplanes and working with bicycles. I wanted to know what narrow escapes she might have had on two wheels. She told about riding on the shoulder of the road when a car slowed beside her. The thugs shouted for her to get off the road. The passenger flung his door open against her bike, which catapulted her into the ditch. All of her other tales had happy endings.

The reluctant guest was in something of a brown funk. He did not enter into the general conversation other than to bark at Marla and Dave. They made the best of it and didn’t retaliate. This fellow tended to be a bit underfoot, although he didn’t interfere with my serving. Unlike our other guests, he ate nothing but turkey. He was a bit antsy too, insisting on going outside several times for short walks. Lise , Marla, and Chris went with him to get a bit of fresh air. He managed to stay through dessert and was obviously eager to leave when the meal was over.

Isn’t Albert, our reluctant guest, a cutie? After closing the bedroom doors, we let him have the run of the house. When he stretched out on the floor after dinner, we thought he was settling in. It didn’t last long, so Marla, now the reluctant one, took him home. We were happy that Connie and Dave could stay to visit.

Toward the end of the evening, we found out that Dennis (18) was visiting across the street and would spend the night with us. He hadn’t expected to stay and had nothing with him. He and I remembered the camo nightwear he found here when David and Nathaniel were here. It was still in David’s room, so he didn’t have to sleep in his clothes. I had gone to bed when Dennis came back to the kitchen where Lise and Chris were watching a video. From the edge of the door he said, “You can’t see me.”

Lise could see him and wondered why on earth he said that. He stepped into full view, saying, “I’m wearing camouflage, and that’s why you can’t see me.” They laughed, and all three watched the video about rednecks. It included a bit about Popcorn Sutton, the famous maker of moonshine that lived a few miles from our house. Lise said there was also a good section on railroads.

Logan and his niece Lily came to fetch Dennis the next morning. They jumped into a game of checkers before going back across the street.

What meal do you have the day after the Thanksgiving feast? We ate at a Mexican restaurant in Maggie Valley, one that $ and I had been to twice before.

Chris, $, and I enjoyed a spicy meal, but we found bland dishes for Lise and John. Everyone lived happily ever after, as far as I know.

14 thoughts on “The Reluctant Guest”