We returned home about an hour before John’s sister Barbara and Thom arrived at our house. We considered ourselves instantly ready for company after unpacking our bags and putting out towels for them. They were with us about 15 hours, but we squeezed in a lot. Settling around the fireplace, we enjoyed their catching up on news with our son $ and daughter Lise. We had tea and Lebkuchen punctuated with lots of laughter.

Chris (a Mancunian, someone who comes from Manchester, England) talked about the etiquette of leaving a social gathering. It is understood that if you have coffee at someone’s home, the first cup is part of the game plan. After chatting a while, you are expected to leave when they offer you a second cup. We have those signals, too, although I don’t think I could define a coffee ending. For hours after that, we joked about situations being “the second cup.” This morning, $ said he might mess up the system on purpose. When the hostess came with the second cup, he’d say, “Thanks. I don’t need more. I still have some.”

I had forgotten what a person from Manchester is called until Lise mentioned it. It is spelled correctly above, but since I am from the South, I was temped to write it as “Mancoonian”. I’ll bet a week doesn’t go by that we don’t speak of ‘coons, referring to raccoon roadkill or my dad’s recipe for cooking the animals he hunted. I will not let myself imagine Chris with a cute black mask around his eyes.

We left $ sleeping on the porch when the rest of us went for a walk before breakfast. $ camps out in all seasons of the year, and he chose to sleep outside instead of using our air mattress inside. It must have been difficult to get up outside with the temperature at freezing. Guests often walk with us, so having four on the road was not unusual. There were six in our group. I was walking ahead to set the pace, knowing everyone could out-walk me. I felt like the lead car on the highway that goes ahead with a sign that says “Wide Load”.

A red truck came up behind us, and we heard it slowing down. The man opened his door a few inches near me and asked, “Is this a movement?”

He grinned and drove on. Barbara assumed it was someone we knew. I had never seen the man before, but John recognized his truck as being one that regularly passes us. If we live long enough and do unusual things, we might meet all the people who live back in this area.

We caught up to neighbor Bob and Logan at the bus stop. The bus came immediately, and Logan jumped out of the car. We greeted Bob, and as he turned the car around, he said, “Let me know if anyone needs a ride, I’ll come get you.” We laughed as he intended, but it’s wonderful to know he would help us if we needed it.

I made everyone line up for the obligatory picture at the creek. I don’t know why I started doing that, so I don’t know how to make myself quit. The group was compliant. Relatives and guests are sweet to accommodate me. 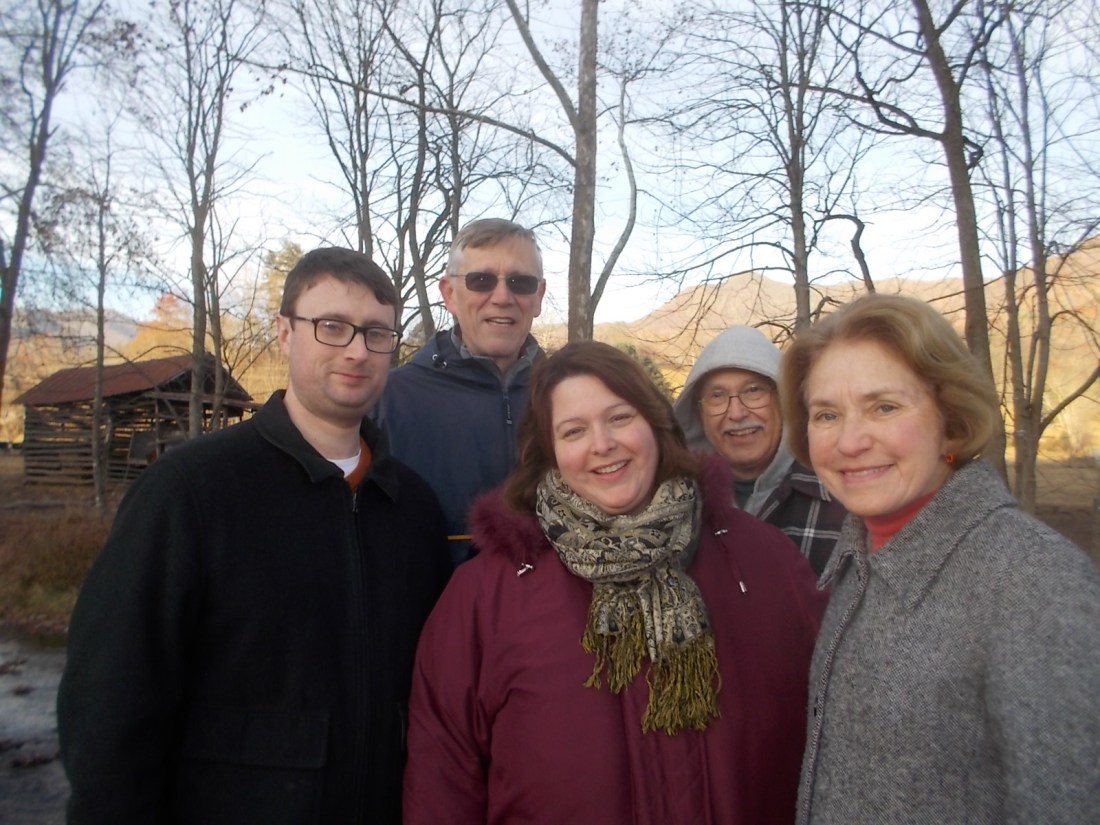 Below are the same people, except Barbara and I swapped places.  John claims no one believes I actually walk to the creek, since there is no photo of my being there.

Breakfast was the only meal we had together on this quick stop. Barbara and Thom were on their way to South Carolina for a big Thanksgiving gathering that will also include a celebration of Chris and Steve’s 50th wedding anniversary. We were sorry we couldn’t be in two places at once. The photo lacks an image of $, but he often engineers that. For those who like to know what was on the menu, we had bacon, hot sausage, livermush, scrambled eggs, cheese grits, whole wheat biscuits, jam, sorghum molasses, and coffee. We downed all but one biscuit, which will become part of the stuffing for Thursday’s turkey.

We were pleased to find the horses had come back to the pasture beyond our garden.  They have been elsewhere for weeks.  Barbara took this photo of son $ feeding DW at the fence.