We had a most delightful turkey dinner at my brother’s home on Saturday, a Thanksgiving feast for relatives on several sides. I was delighted to meet Beth’s brother Don and his wife Martha. I’d heard about them for many, many years and had never met this vibrant couple. Bob and Beth’s three children and three grandchildren were there, as well as Bob’s two brothers-in-law from his first marriage. I missed getting a photo of Patty, Julie’s house-mate.

As I looked around at the 18 people, I grouped them by relationship. Married couples included Beth and Bob, Martha and Don, as well as Christie and Hunter.

We had whole families – Kathie and John with son Max and Susan and Bill with children Sam and Kate.

For siblings we had Beth with her brother Don, brothers Rick and Hunter, and sisters Susan, Lise (treated as a sister), Kathie, and Julie.

In memory of my mother, who loved generational photos, I took the three-generation picture of Susan with her mother Beth and daughter Kate. Note to Rhodes graduates: Susan Ramsuer’s brothers are Rick and Hunter.

Rick often does a magic trick or two at family gatherings. This time he astonished everyone when he brought in a large saucer-shaped bag and unpacked what looked a bit like a charcoal grill. Lise recognized it as a hang or hang pan, which she had seen played in Europe. It was invented in Switzerland. Rick collects musical instruments and has many from around the world. He had had his hang only three weeks and was trying it out on us. We were amazed.

The original craftsman was no longer making them, but he found someone in Asheville who did. This one was tuned to the key of D minor. Several responded to his invitation to try their hand at it. 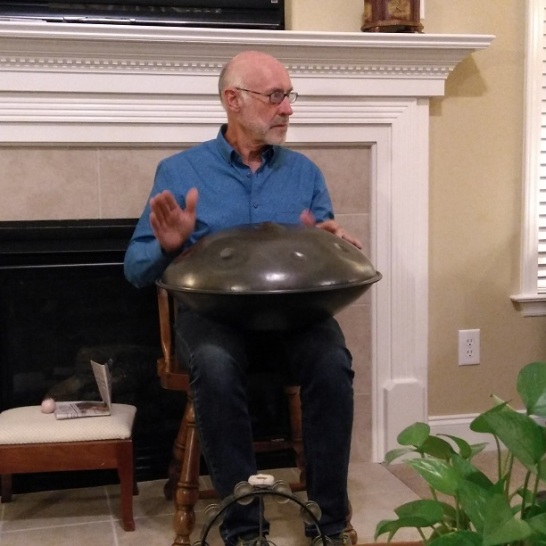 Bob’s first wife Susan (cancer victim) and her brothers Rick and Hunter came from a musical family. Their mother played the piano, and their father played the musical saw. It was not unusual for them to give a gift of performance. If you learned a new piece, you could play it for someone for a birthday or Christmas gift. On the way to our pre-Thanksgiving dinner, Christie reminded Hunter that he hadn’t written the song he intended to. They were going to have lunch with Christie’s aunt the next day, so he wrote the words to honor the aunt as they traveled in the car. Just before they left, Hunter typed the words on Bob’s computer and printed it out. He whipped out his guitar and gave us the premier performance.

Avoiding names, let’s just say a volunteer offered to ask the blessing for breakfast on Sunday. He prayed for several things, ending with earthquake victims in Iran and (pause) cataclysmic (break to fish for the right word) eruptions. I smiled, but I lost control when Beth began to giggle. After cataclysmic eruptions , he paused and said “or whatever”. Lise lost it at “whatever”, and the whole table laughed. Hunter wiped laughter tears from his eyes as Lise and I did the same. Were we rude? Absolutely! The praying man took the mirth and ribbing gracefully and laughed at himself. He had been going at such a great rate and then came to a complete stop to get the right words which were over the top.

Hunter got the loudest laughter with his eagle pose. He and his brother Rick talked about yoga poses. Hunter, wearing his hat, said he’d show us something funny and assumed a rather tortured pose. He stated, “This is an eagle.” We waited for a punch line.

Flicking off his hat, he said, “This is a bald eagle.” The visual impact on us was most amusing, and we could not control our laughter.

Our periods of catching up with news were punctuated with puns, funny stories, and lots of laughter. We have so very much to be thankful for.

12 thoughts on “Pre-Thanksgiving in Winston Salem”