Grandson Nathaniel baked us a Twelfth Night cake. He saw a recipe for it at home, asked John if we wanted it, and sent him the list of ingredients. The first I heard of it was while we were shopping for last-minute Christmas things at Walmart. John was looking for candied lemon, orange, and citron. He phoned Nathaniel in NY to see if a general fruitcake mix would do. Now here for the Christmas break, he picked out the bits he wanted and baked the cake. We found out the tradition of making a special cake for the 12th day of Christmas goes back to medieval times, though the oldest written recipe was printed in the early 1800s. We tasted it while it was still warm. Yummy! 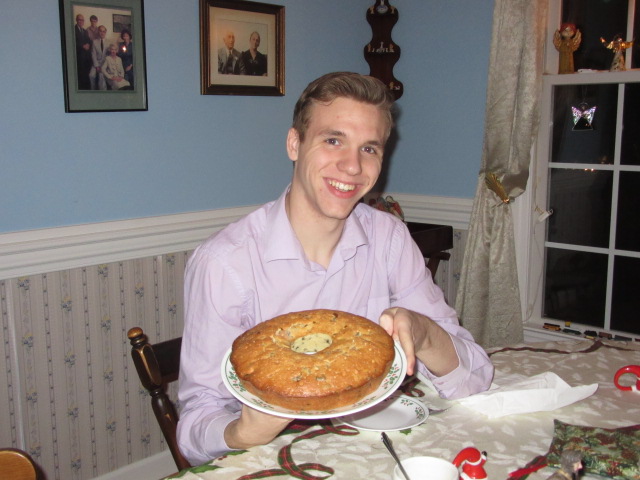 Our chef always cleans up after himself in the kitchen!!! The next morning I saw the inside-out silicone bundt pan he had left out to dry. A giggle escaped me. Picking it up, I said to him and John, “I’ve never eaten a funnel cake. This looks like the funnel you’d need to make one.”

David was up when we came back from our walk, because he accidentally went to bed much earlier than he intended. The temperature outside was 17F. To us the house wasn’t cold, but his toes told him otherwise. As he waited for me to cook bacon, livermush, and scrambled eggs, he said how grateful he was for an instant fire.