Grandson David doesn’t have a ritual for leaving, like Nathaniel’s lowering of the hall mirror. I watched to see what David did. He packed and packed and packed, ferrying bag after bag to the car. It made sense. Nathaniel had one carry-on piece of luggage for his week here. David traveled by car, stayed here over three weeks, and was exchanging his summer/fall clothing for heavy winter wear. Only Nathaniel has a HALLmark ritual.

As David was leaving, he moved Patty’s Pocket for me. Adopted-niece Patty gave me a bird pocket which I hung in the Bradford pear tree. I hadn’t seen birds using it, although I could have missed the activity because we were on the go. This was a marvelous winter gift that the birds could use right away for shelter. David moved it higher and further into the center of the tree. If it isn’t used here, I’ll move it a shrub behind the house where I know the birds will take advantage of it. The pocket will be a seasonal rental for the ski crowd and a maternity suite in the spring.

While John and David were making their record-breaking run to New York, I walked to the creek to see the ice. The weather had already begun to warm up when I took these photos. Despite the warming trend, I turned back a day later because the road was icy under my feet. 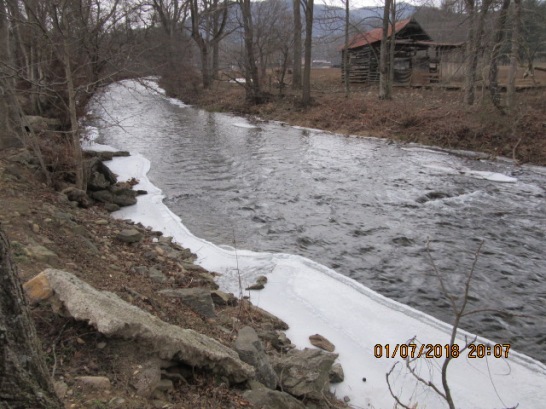 The record-breaking travel statistic was in the wrong direction – it was the longest it had ever taken John to drive that distance. Around midnight a warning light showed on the dashboard. They waited an hour in West Virginia for a tow to the nearest Honda dealer. I think someone opened the office at 8, and by 9 the new alternator and the man to replace it had come. Despite the long delay, David arrived at the college before his deadline.

To take my mind off David’s leaving, I worked with the new camera. I had tried out the phone WiFi connection, activating the shutter with the phone while the camera was sitting on the mantel. The photo shows both my hands on the phone as I took a selfie.

I don’t know what went wrong, but the transfer connection to the computer no longer worked. Frustration was a good antidote for sadness! The basic function for which I bought the camera is now working again, and I’ve shifted my focus to February and March when the boys hope to come for their Spring breaks.