Grandson Nathaniel is normally on an early schedule for school, so he was dressed and ready to go walking with us. I was glad the little cat came running out to greet us, because Nathaniel likes cats. She stayed with us half way to the stop sign, frequently stopping us to rub against our legs. When neighbor Bob stopped his car to speak to us, young Logan hopped out. He wanted to be with Nathaniel.

Father to son, “Are you going to run all the way to the bus?”

Logan was already dancing around Nathaniel, and the two of them began to walk.

Logan challenged our tall grandson, saying, “I can beat you!”

Nathaniel replied, “I’m not going to run, but I’ll walk.”

I fumbled getting the camera out and took a video as quickly as I could. Nathaniel had a fast pace, with Logan flapping along beside him. It wasn’t until I looked at the clip that I saw Marla in a green jacket standing with Albert. All the commotion on the road made Albert walk toward them. At the same time, Bob turned his gray car around and started back home.

All the walkers reached the bus stop. One of us wondered if there were school, because we never had President’s Day off. I missed the photo of the week – Logan’s face when he thought for a split second there might not be school for him. The bus came chugging up the hill, and Logan waited for the driver’s signal to cross the road. Albert pulled Marla away as we continued to the creek.

Quick-thinking John had his hand out for the camera when I mentioned posing with the rushing water. That’s the first time he has pulled that on me.

Nathaniel is more resigned to being in front of my camera, so I got two shots of him. In one he had just dipped his hand in the water to see how cold it was, and then he turned to climb back up the rocks. 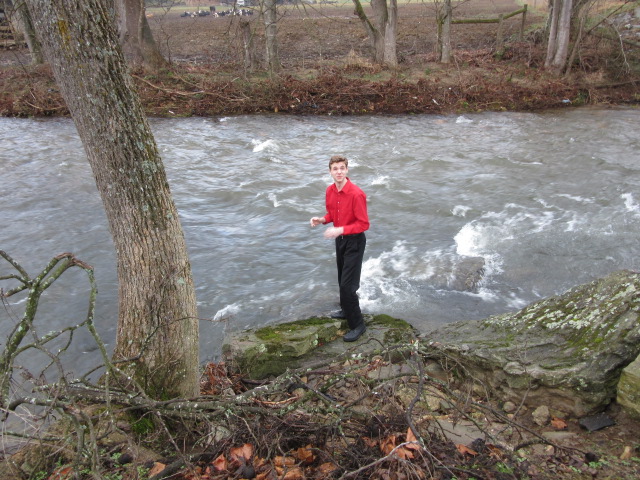 After walking, we had practice biscuits for breakfast. Our biscuit-loving friends are coming next week, and I want to be ready. Recently I read again that soft flour is best for Southern biscuits, White Lily being the preferred brand. John is enthusiastic about this, because he prefers that I not use whole wheat flour. It’s only fair he should win once in a while, don’t you think?