On the way to the supermarket, I told John I had intended to think about a small celebration of neighbor Logan’s birthday. He suggested I text his mother. I waited until I found wrapping paper in the store, because we had no appropriate ones at home. Shawn responded yes, so we doubled back and picked up a tiny cake. All we had to do was assemble a few things for this instant party. The candles looked pretty impressive on the cake. 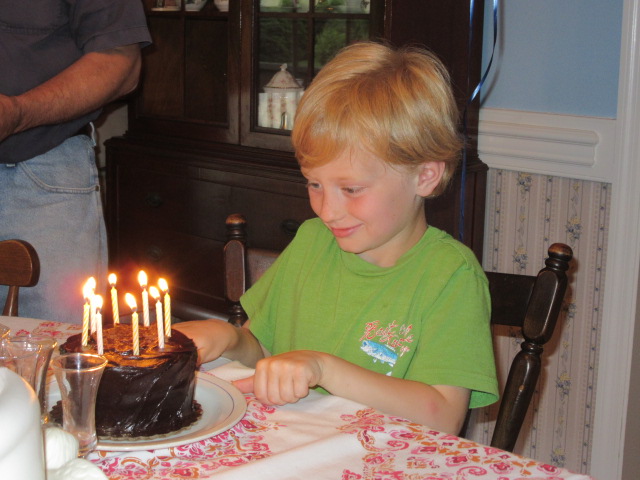 Logan had plenty of air for the ritual blow-out.

By holding the camera over my head, I was able to get a shot of everyone. Left to right were Bob, Shawn’s sister Barb, grandson David, John, Logan, and Shawn.

We had indoor fireworks (sound only) – packing bags I’d saved for Logan to stomp on.

After Logan opened his gifts, he and David played games. The rest of us went out to the screened porch to chat in the cool air and enjoy the mountain view. It was the first time we’d had a chance to talk with Barb, visiting from Ohio. I love that relaxed time when no one has anything more to do. Bob joked that he would send Logan back to us at 10 if he didn’t go to sleep after eating chocolate. After the party broke up, David looked at the clock and laughed that we might expect Logan at any moment. We did see the boy before we expected, but it wasn’t until the next morning. He ran over to see if he could stay with us while his folks went to Asheville to visit a friend in the hospital. He joined us for a late breakfast. David again played card games and computer games with him.

Logan’s niece, Lily, came to get him when his folks returned. Shawn let me know when the “littles” were playing in the water. Water came into the small columns, and the jets could be aimed. David ran to feel how cold the water was and ran back before he got wet. I laughed at how tiny the toy was compared to how large it looked on the box. It might be the right size for Shawn and Bob’s two-year-old grandson.