Both grandsons, David and Nathaniel, had a special day off while their mother was here. David chose to swim at waterfalls with her. What would be special for the younger son? We made several suggestions without making him jump up and down with glee. Would he want to visit some town to wander down Main Street? How about visiting a few antique stores? He didn’t reject any idea and was willing to go along with whatever was decided. I finally realized that he stated his first choice a few days before. He wanted to bake something special on his day off. He baked the apple pound cake in the morning and brought it out to the porch to put it on the cake plate. He might have needed more space than the kitchen afforded. I thought it was great, because if there were crumbs, we’d brush them to the floor where they’d fall through the cracks. 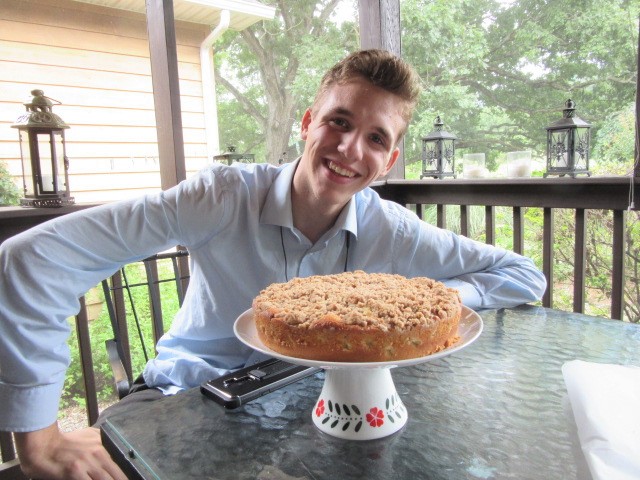 He is used to the demands of my camera and willingly posed with his mother and Grandpa. He asked if we had dessert plates, already aware of presentation of a special dish. He knew where the good china was, and I brought out the sterling silver forks. He even lit candles for the occasion. The table was beautifully prepared, though we were not. Next time he might ask us to dress for dinner. Easy for him to say, since he owns a white tux.

For the final flourish, Nathaniel drizzled crème fraiche over the slices of cake. He pronounced the French words as a chef would, and David used the American pronunciation. The rest of us just provided simple hums and grunts of praise.

Later that afternoon we wandered through an antique store that we pass on the way to town. I was surprised that the inside was not junky like the outside. After a leisurely walk through the whole place (felt like 10 acres), Nathaniel poured over the vinyl records and bought a small stack of them. I think he was satisfied with the time spent with his mother.

Years from now, when Nathaniel is a well-known pastry chef, a reporter will ask what special person inspired him to cook. Was it his mother? No, but she can boil water without burning it. Was it a grandmother? No again, and here is the picture to prove it. She baked a cake that came out of the oven laughing at her.