Neighbor Logan (8) came over and asked if he could stay with us while his parents went to a meeting at their church. Of course, we were delighted. He and John played two games of checkers until we heard a storm approaching. The boy was very patient with me and the camera. I tried to focus on the bullet-boy as he ran on the porch, and he rushed up with a big grin on his face. I’m going to keep the image handy whenever I want to be infected with laughter. 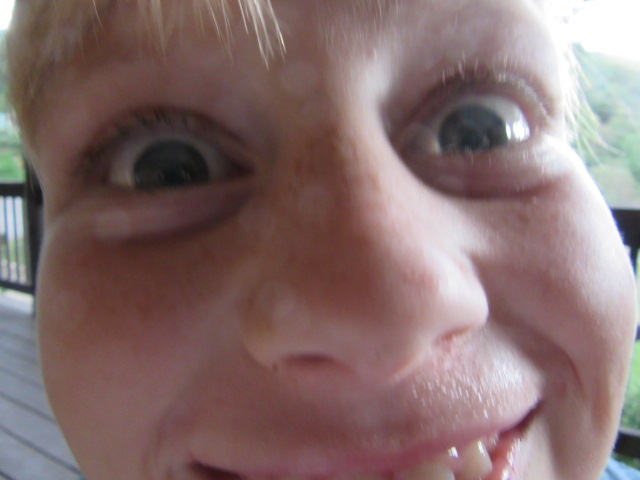 Logan ran one of our radio-controlled cars as we waited for the storm. He put it up to his face to feel the wheels spinning. I caught the smile, but not the action. 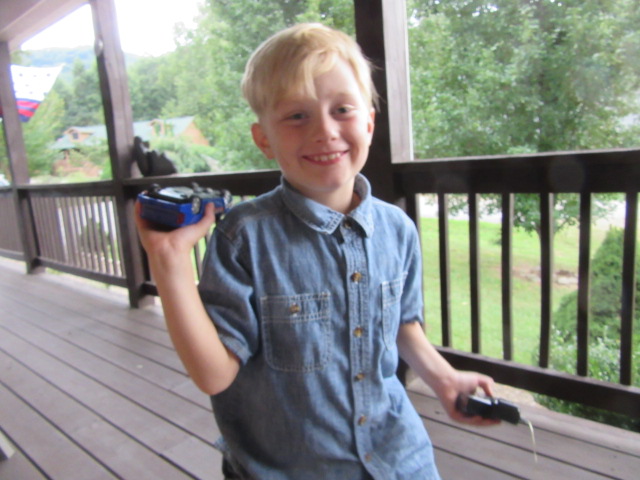 We first heard the heavy rain, and then watched as it approached from the mountain. For a few moments it was raining on Logan’s house and not ours. The fellows continued to throw a tennis ball back and forth until it escaped into the dripping bushes. Logan was all for chasing it, but John stopped him with a simple no.

Our ritual for a visit with Logan is hiding a granola bar for him to find. When we first began three years ago, he would ask for help after five seconds of looking. These days he is more observant and keeps hunting. I warned that this one would be difficult to find. Can you see it? It’s on top of the fire extinguisher.

Logan looked everywhere with his eyes before he began to climb on the counters. He moved things gently and searched thoroughly. I avoided looking at him, knowing my eyes would be tempted to glance at the hiding place and give the game away. He finally asked if I would tell him how high it was, which I indicated with my hand At last he ran toward us at the other end of the room.

“I found it!” he exclaimed. With bewilderment he said, “There are three others in the cookie jar.”

The response in my head? Aaaauuuggghhh! That had been my hiding place for all the bars since grandson Nathaniel found Friar Tuck in an antique store. Logan also spotted the bar I had hidden. It’s back to square one for Anne!

42 thoughts on “Face Time with Logan”

Sugar And Spice And Everything Mice