We looked like a normal family having Sunday dinner in a restaurant. John, daughter Lise, and grandson Nathaniel posed before we ordered, thinking that would satisfy me. 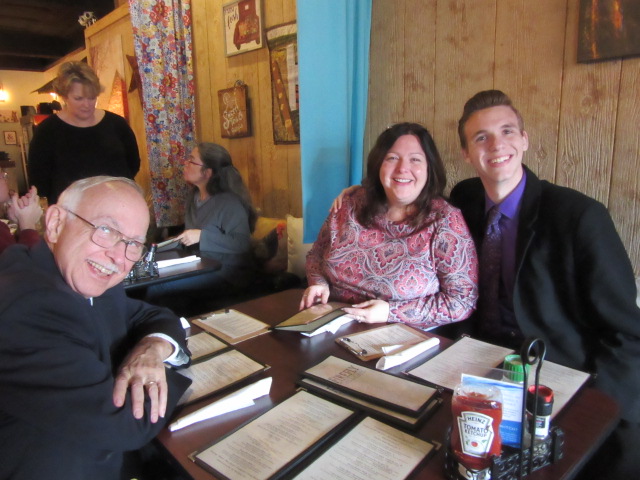 I was content with one photo until the end of the meal, when we became boisterous. You know how it goes – one funny story leads to another until everyone is howling. Lise brought up Nathaniel’s childhood mispronunciation of DVD, which he called Dee Va Dee, and it caught me off guard. For the first time in my life, I spewed water halfway across the table. Lise and Nathaniel could no long contain themselves, and that had to be pictured.

A bit later, grandson David texted me the link to the concert from his college in New York. We pulled up the live stream shortly after it began. He was in the very middle of the choir as they sang Handel’s Messiah. His mother Kate was in the audience, though the camera never moved to show the people.

Niece Julie was here with her house-mate Patty. We had some break-the-rules pie before supper. Yes, this crazy family sometimes starts a meal with dessert. An hour later we noshed on cheese and crackers amid much merriment. At one point, Lise had tears rolling down her face because she laughed so hard. I predict we are going to sleep well tonight.