Like all artists, beginning chefs practice for hours.. When passion is involved though, you might substitute “play” for “practice”. I enjoyed watching grandson Nathaniel in my kitchen. He piped chocolate on a plate, working for skill and speed. A design like this might be used to decorate a plate on which a dessert is served. Grandson David was the designated cleaner, eating it the next day.

I cooked poached eggs for breakfast, using silicone forms. Nathaniel had a second one, which he cooked in the classic way. He boiled water in a saucepan, added a little vinegar, swirled the water with a spoon, and gently tipped the egg in the water. He likes a runny yolk, so he took it out before the yolk solidified.

Nathaniel held his phone in one hand to take a video as he cut the egg with the other hand. I was filming the same scene with my camera. We enjoyed the replay.

I requested a chocolate dessert of his choice. As he and I walked to the creek, he was planning the trifle. While chatting with neighbor Marla, he spoke of his plans and invited her to come over when it was ready. We were delayed by several things, so Connie was home from work and able to come for the spontaneous party, too.

Nathaniel practiced assembling the trifle in small bowls. I would have plopped the layers in with a spoon, but he did the proper thing of using a pastry bag. Each layer was even, making a pretty picture from the side. For our little group, he used a large bowl. If I knew he would settle near us after college, I’d buy a trifle bowl! 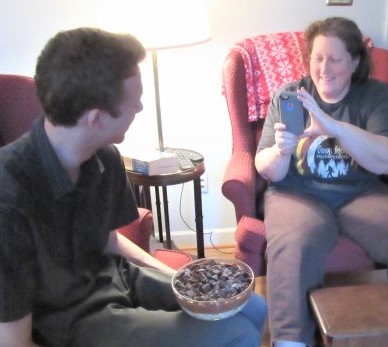 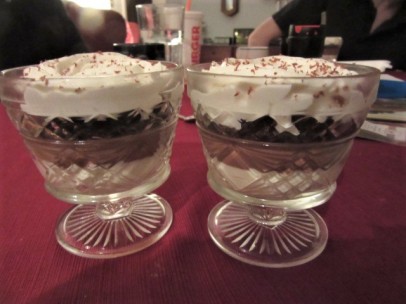