Niece Julie organized a marvelous gathering of her sisters and close family members. Considering how busy this group is, it was amazing that 16 of us could meet for several hours. We were greatly rewarded by spending quality time together. Last Fall Julie’s brother-in-law, John T., was diagnosed with stage 4 gastric cancer. What a shock this was to all of us! He was young, in excellent shape, and appeared to be the picture of health. His medical care has been excellent. JT accepted the diagnosis, followed the advice of his doctors, continues to fight this dread disease, and continuously gives his life to God. We all support him in any way we can, including prayer.

You might guess this was a gathering of family members, since most of the action took place in the kitchen and at the dinner table. Julie picked up our grandson Nathaniel, and he was making a caramelized onion dip when we walked in. We did the unpardonable thing of arriving half an hour early, interrupting their last-minute preparations. We had left home early because we had to drive through fog and rain almost the whole way. They were gracious.

Others came in and enjoyed watching Nathaniel shake the pan and flip the onions. Cousin Sam, also a freshman in college, brought Brownies he had baked while at home on Spring break. Two of the women were in the process of leaving a job, so this is a period of transition for them. Myra and Rick had come from a magic convention in Pigeon Forge. They were a bit behind us, having driven on I-40 near our house to get to Charlotte. Christie and Hunter came the furthest and were spending the night, while we had to get home for church responsibilities the next morning. Christie’s Chicken Marbella was fantastic. Beth and I talked about gardening, since I brought her some seeds from our lavender Rose of Sharon bush. I mislabeled them and had to correct that verbally. Cousin Kate talked about finishing her time with the Girl Scouts and beginning her quest to become an Eagle Scout. Beth and Julie were the chief dish washers. Many thanks to them for cleaning up after us. Brother Bob and I chatted about some childhood memories. As you might guess from this paragraph, we mixed and mingled throughout the afternoon. 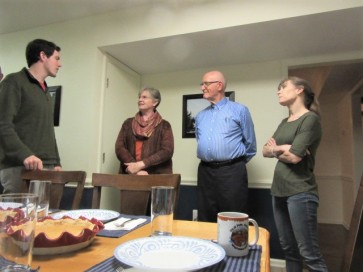 Our conversation was more focused while we sat at the table. Christie asked JT about his most memorable trips. He couldn’t narrow it down. He said he learned that a trip was not about a destination, but rather it was the experience of being with the people around him. That led to JT’s account of a recent dinner. Three former students, now in college, heard about his cancer. They took him out to dinner to thank him for all he had done for them. Two of their fathers died before JT knew them, and one lost his dad while he was in JT’s class. JT said, “They told me I had been a father figure for them….” We all quietly lost it at that point. JT is a true follower of Christ, one whose life has affected many people around him.

We pray that JT’s joy in living will be complete as God continues to pour out blessings through his life among us. This humble man has a mighty faith that is truly awesome. Rather than moving mountains, his faith moves human hearts.