Our outing for the day was going to Connemara, Carl Sandburg’s home for the last 22 years of his life. Grandson David and friend Gerhard paused near the parking lot to read the first informative board.

Near that sign, John chatted with an older man who saw Sandburg occasionally. He and his brother could not drink cow’s milk, so they came regularly to buy goat’s milk. Mrs. Sandburg had a herd of prize goats that supplied their need. The man said when they didn’t see Sandburg, they often heard him singing as he strummed his guitar in the house.

John and I toured the house last year after major maintenance projects were done. Pictures had not been rehung, and the furniture was not all in place. We were happy to see everything now back in order. The docent told us Mrs. Sandburg moved to Asheville after Sandburg died. She wanted to leave a legacy of her husband and sold the house and grounds to the National Park Service. She sold her goats, and she and her daughter packed their clothes, leaving almost everything else behind. The house is basically just as it was when our Poet Laureate died. He had three Pulitzer Prizes, two for poetry and one for his biography of Lincoln.

The Sandburgs had quite different schedules. He wrote into the wee hours of the morning, whereas she was up early to manage her goats. We saw her office, filled with filing cabinets of records for all the goats she had owned. They always had dinner together and exchanged news of their day. The docent made it easy to imagine daily life in the Sandburg household. He met a grandson himself, who recounted the time he dropped a cat down the stairwell to see if it would land on its feet. Both cat and boy survived.

After leaving the house, we went to the barn. We knew the park service searched the records and bought back some of the goats. All of them on the farm are descendants of Mrs. Sandburg’s herd. We enjoyed the house tour and delighted in the goats. Most of my photos were taken in the barn, as we petted the extremely friendly animals. Gerhard, John, and David stood with the red farm buildings. David agreed to pose as a goat. The little goat on the ground near me had surgery a few days before to remove an extra eyelid. There was a sock-like dressing over his head. 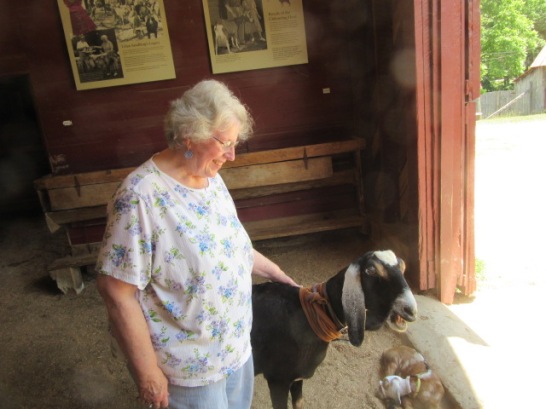 We had lunch in an Irish pub in Hendersonville before driving home on the Blue Ridge Parkway. John drove us to Looking Glass Falls, where Gerhard and David walked down the steps near the falls. By enlarging the photo, I can spot David’s maroon shirt on the lower right side of the picture. Gerhard, wearing a white shirt, is next to him.

To make it easy for your eyes, I’ve included a photo of the two of them with the falls in the background. 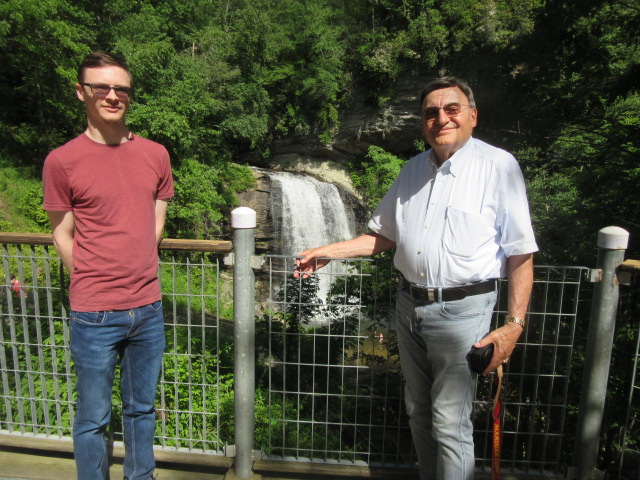 We went on to Sunburst Falls, my favorite. Gerhard, David and I got out to see the falls up close. I restrained myself from taking a photo, since I already have so many. I did have one last photo of Gerhard on the spot where he took photos of the mountains at Pisgah Inn.

28 thoughts on “Connemara with Gerhard”