Good things come in threes, not just bad things. I had three days in a row of being with special people and doing fun things. On Mother’s Day, son John $ came for dinner and had a couple of four-legs with him. The dogs belonged to a friend who went to Cherokee for a few hours and picked up the dogs on her way home. She brought $ to us, since he has been without wheels after my car Snot was hit by a falling tree. This sounds like falling Dominoes – $’s Mazda was scrapped, and we loaned him the Sonata until he could get another vehicle. Snot is getting new windshields and a new roof. The first car happy ending is below. Meanwhile, John grilled brats, chicken-apple sausages, squash, and Bavarian sausages for our dinner. We ate on the porch and kept the dogs company. Most appropriately, we had a dark chocolate cake that John bought for dessert. Anything that ends with chocolate is excellent.

John $ with Dolly and Dandelion

Three neighbors and I had a ladies’ day out to shop at Great Smoky Arts & Crafts Community. Around 1937, the artists who had worked in Gatlinburg gravitated to an area called the Glades. The studios and shops are on an eight-mile loop out from the town. All of the items for sale are handmade in the US, many of them on site. Our mission was to replace a pottery chicken roaster. Connie and Marla had lived near this area before moving to our neighborhood. We stopped at a traffic light, and Marla recognized friends in the car stopped beside us. We went first to Treasures in Earthen Vessels where David Howard creates pottery. They were old friends, so they got their roaster and had a nice visit while Shawn and I looked at everything in the shop. The ladies posed, and we had David step in the picture. His son is getting married in a month, and he is very busy making a mug for each wedding guest. 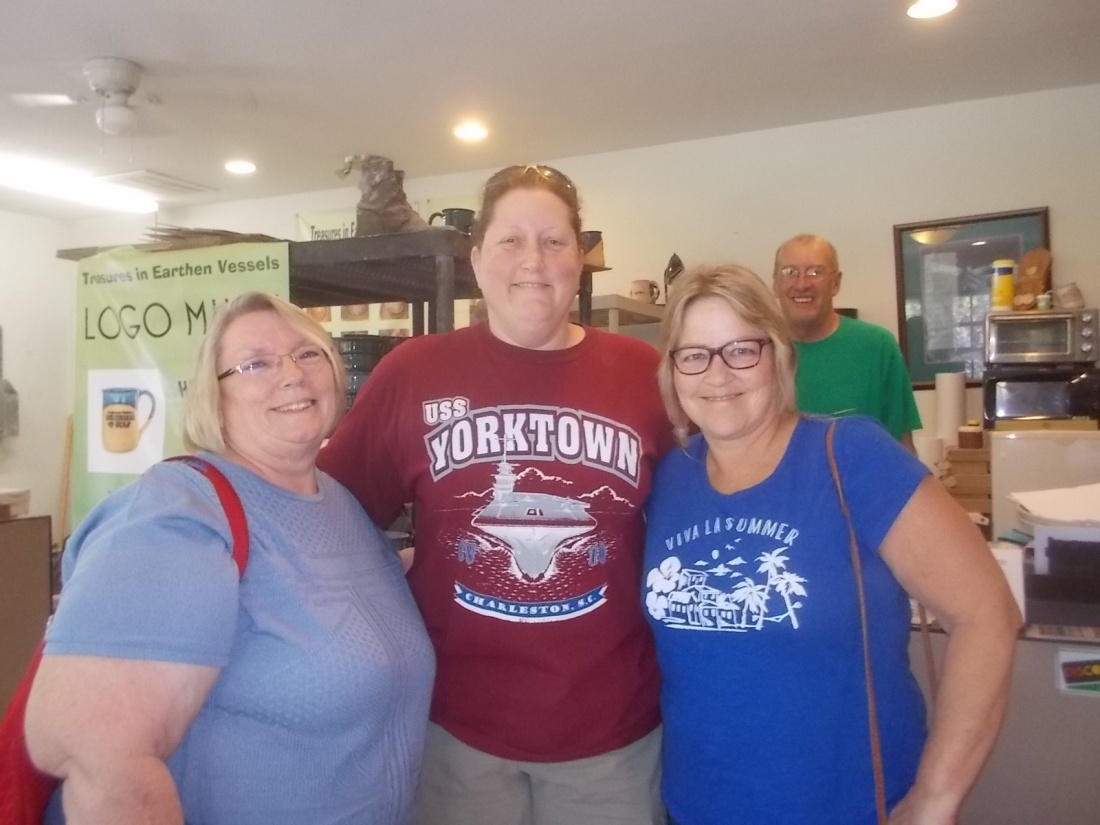 A basket of plastic toy soldiers was near the counter. The sign urged everyone to take a free soldier home and pray for all the men and women in our military. I popped one in the bag with my purchase and didn’t think about it again until he fell out at home. The more I thought about it, the more I was impressed. In an unobtrusive way, David was supporting something that is close to his heart. His shop is Treasures in Earthen Vessels, 170 Glades Road #32, Gatlinburg, TN 37738. dhowardpottery.net 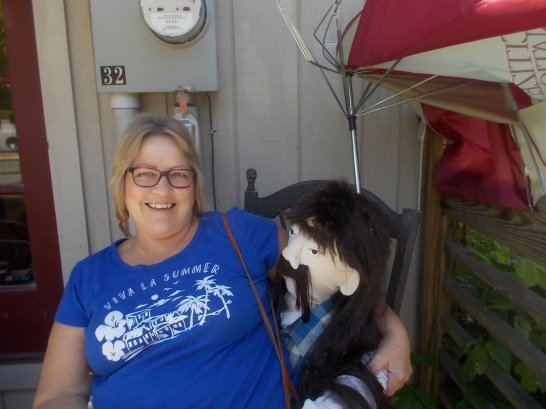 Shawn with big doll outside shop

We went to other shops along the road, seeing wooden items, jewelry, baskets, and decorative items for the home. For lunch we went to Carver’s Orchard where the restaurant looks out over the apple orchard. The photo is dark, but the point was for you to see the background. Nice excuse for a bad picture, right? 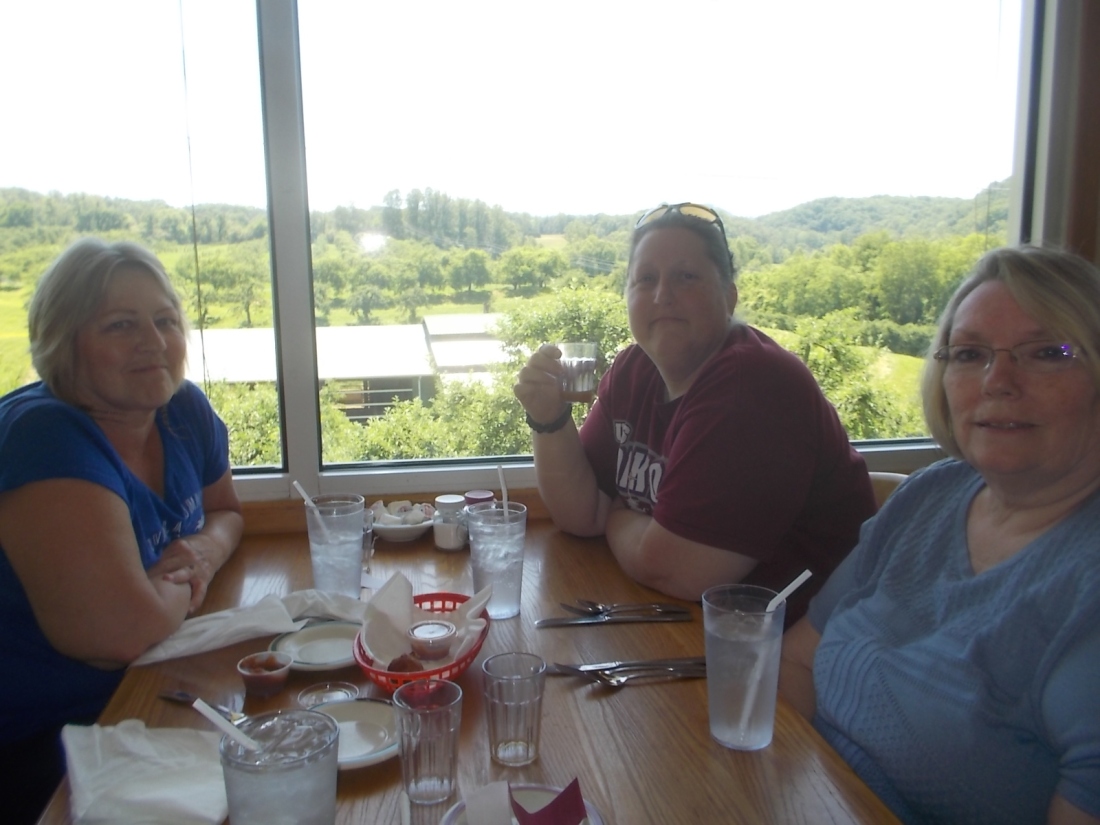 While I was out gallivanting with my friends, husband and son were looking at cars. They were gone longer than I was, after a very successful day. They put a deposit on a 2010 Subaru Forester, and the next day we took $ there to pick it up. I know he despises having his picture taken, but he agreed to a quick one, probably as payment for our help. You’ll realize $ is a very good driver when you learn that he chose a stick shift to drive in the mountains. 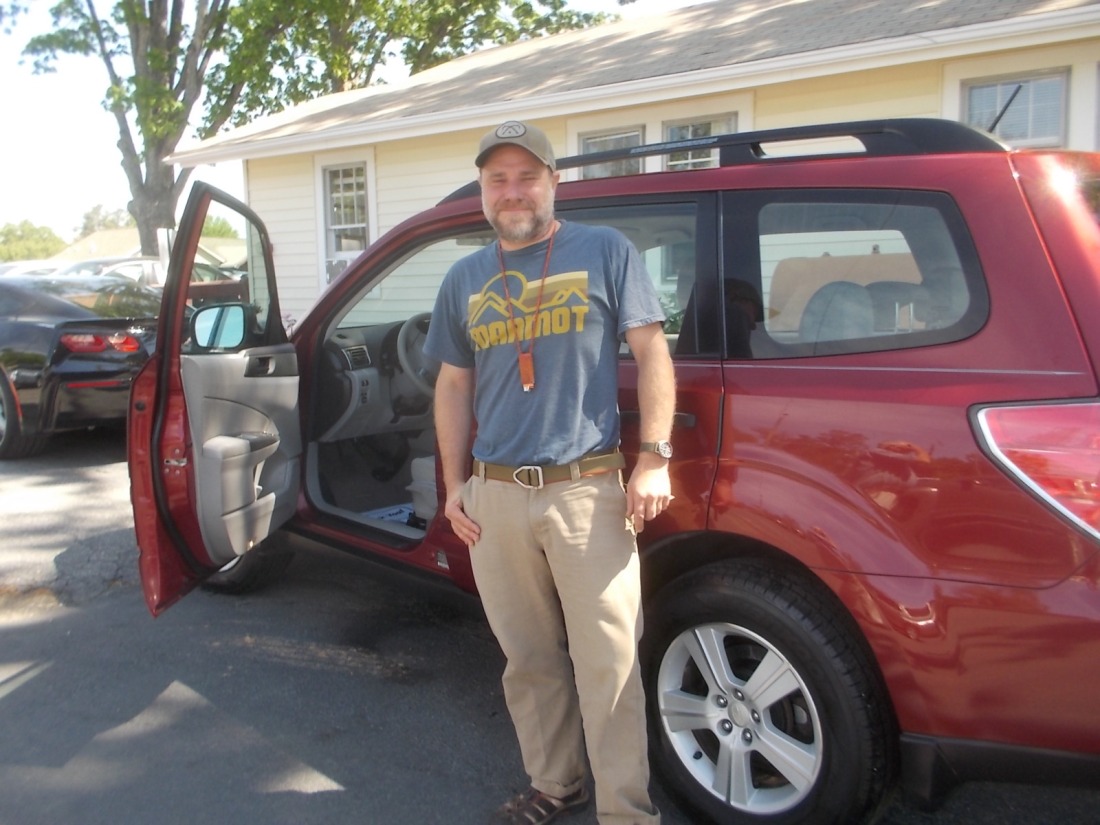 24 thoughts on “Mother’s Day Plus Two”