The weather may not say summer, but the activities do. John drove to New Jersey to get grandson David. The first photo by cousin Jay is the segue to David’s summer. The college choir sang in Northfield MN, where Kirsten and Jay hosted David and his tour partner Aaron overnight. Cousins Carolyn and Eric were there for the concert, as well, and joined the others for an ice cream treat. (Kirsten and Eric are John’s first cousins on the Norwegian side.)

David always makes me laugh. I wish you could have heard him tell the tale of ripping his jeans on tour. Every year they dare him to climb in the overhead luggage compartment on the bus, and he is still thin enough to do it. He was pulling himself out when he heard a ripping sound. Standing in the aisle, he reached his hand behind him and felt UNDERWEAR! He had to hold his jeans together until he could get to his luggage and change. 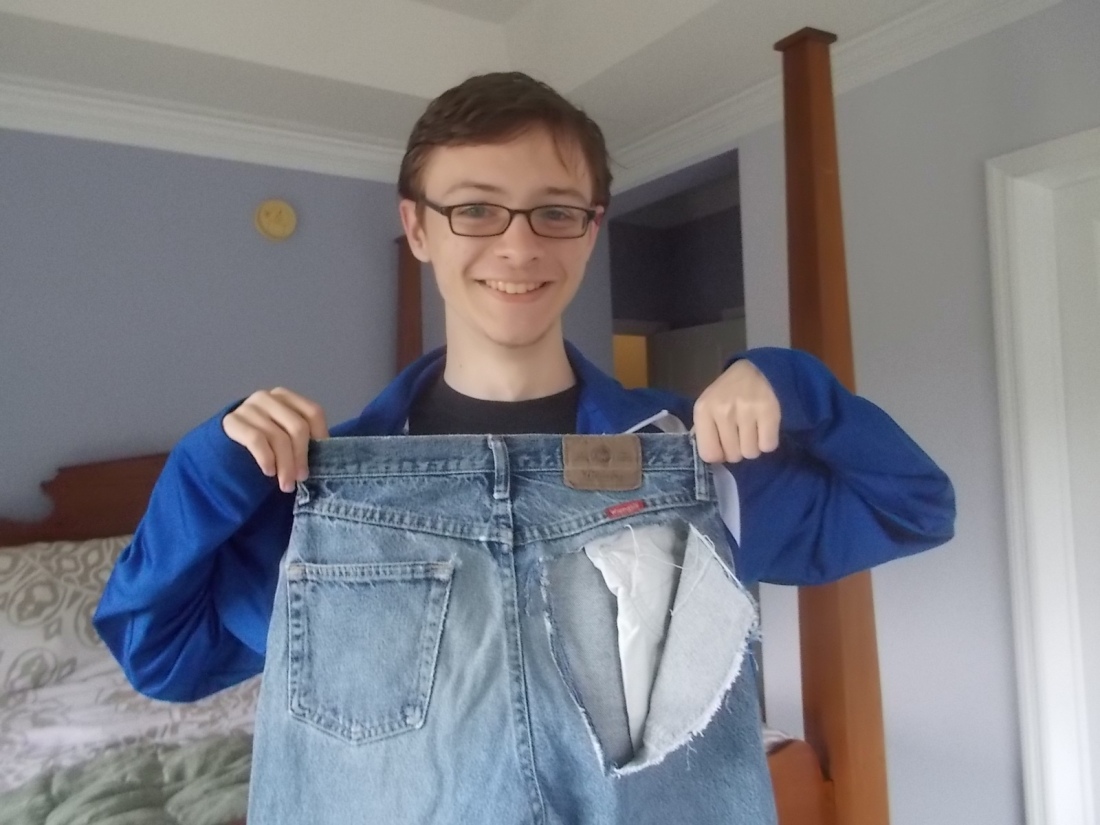 Grandson Nathaniel sent us a photo of himself taken in a town near where he lives on Long Island. He, David, and John always dressed to go to the parade on Memorial Day. It was great to see he was upholding the tradition.

We didn’t have a parade to go to, but our neighbors came for a cookout. John found David’s DVD of Arlington National Cemetery, which he had playing mutely on the TV. That was most appropriate. As we sat around chatting, neighbor Bob asked if any of us had relatives who had died in service. Only Dave did. His brother died in Korea 20 days before the end of the hostilities.

I always enjoy this group of people, and I was glad we got in some neighbor talk. We have common concerns, after all. The funniest was about carpenter bees, something we all battle. There are as many ways to fight them as there are households. Bob said he uses carburetor cleaner! After the bee makes its tunnel in the wood, he squirts in the cleaner and plugs up the hole. We reached for our can of spray meant for these pests, and Frankie said they had tried it, implying it wasn’t very effective. I think it was Connie who mentioned swatting the bees with badminton rackets. I can tell you this, if there were a contest for bee beating, either Frankie or Bob would win. Bob made a bee bat out of wood. It had a handle and holes drilled in the paddle to let the air through. He claimed the bees taunt him, staying just out of reach. Frankie demonstrated her technique using a net. She went through the motions as she said, “It’s all in the wrist. Twist, throw, stomp! Twist, throw, stomp. I’ve gotten 30 at one sitting.”

Logan (6) didn’t take much time to eat, because he wanted to play with David. They built a tower for marbles with a set of plastic pieces. David said they were going outside, so I presume they flew an airplane and did other active things we didn’t see. When Logan asked if they could play with the Nerf guns, I said yes, not knowing that David didn’t want to. He said it would make a big mess, and it might interrupt the visiting on the porch. I backpedaled quickly, suggesting computer games. The two of them stayed with that until the party broke up. I overheard David suggesting strategy, but he paused the game so that I could take their photo. Both fellows cooperated quickly, putting on their happy faces, knowing I’d then leave them alone. Later I found David playing the game by himself. He must have been exploring the possibilities he had seen when Logan was at the controls.

At different times John, David, and I watched the documentary on Arlington with the sound on. I feel we truly celebrated Memorial Day in a reverent way.

The real end to the holiday came a day later. Joyce, next door, could not come to our gathering because she had company. Tuesday afternoon she texted to see if we were home and if she could come over. She, John, and I had a delightful visit. For me, that was the final touch that made the holiday complete.