As we drove toward the church, I realized John and I had sung there 53 years ago with our college choir. How nice to return for the wedding of his first cousin’s daughter! We had seen Katie most recently at the funeral of her grandfather and the wedding of her brother. Now it was her turn for a very happy occasion. 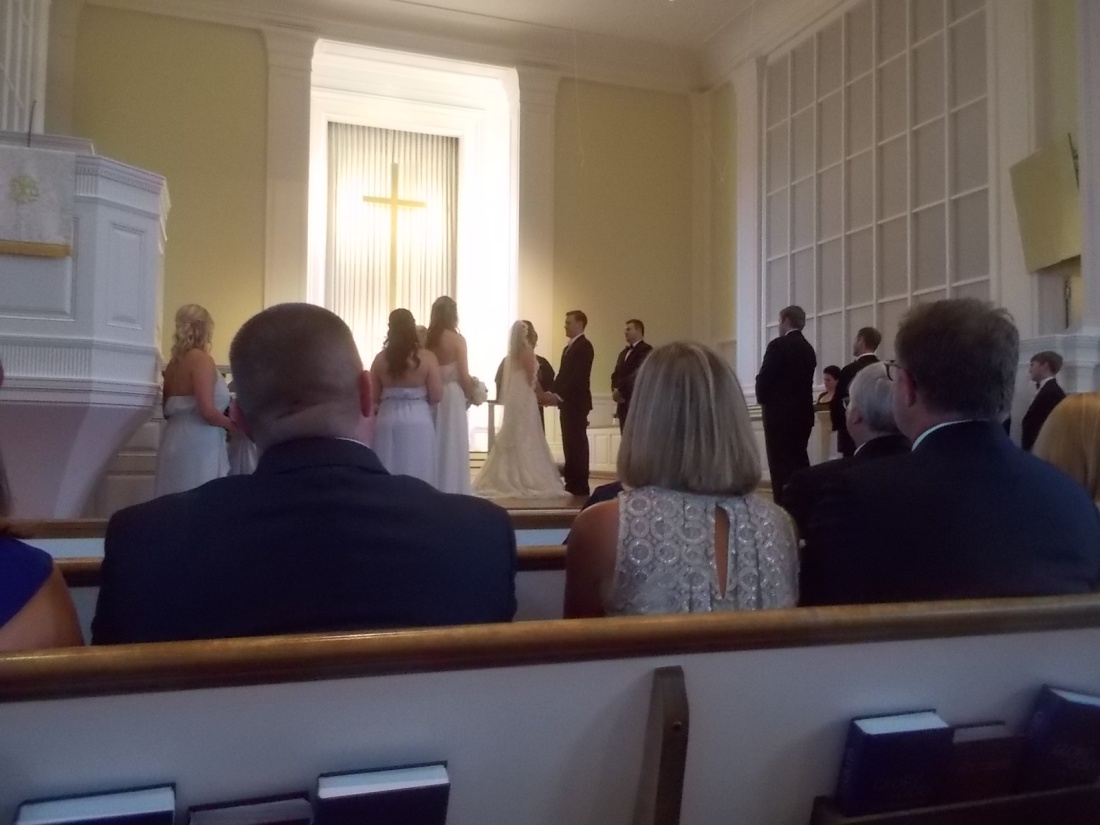 We were surprised that Katie’s only nephew was the ring bearer. We thought he was only a year old. A young woman sat in the front pew armed with a child’s book and a bottle. I figured she was there to catch the baby as he toddled by. No, it was better than that. Little John Junior was too young to walk. His mother was a bridesmaid, and she carried him down the aisle and handed him to her sister in the pew. I got his picture after the ceremony when his dad was holding him.

After Katie and Matt exchanged vows, the minister asked the congregation to stand if they would promise to support and encourage the couple in every way possible. He told the newly weds to turn around and savor the moment. They were to look carefully at all the people who were there to uphold their marriage. I had never seen that done before, and I thought it was a very meaningful part of the ceremony.

The minister said several amusing things about Katie and Matt. He knew them well and was advising them to love each other as Christ loved them. The hilarious words came during the prayer. He said, “When they think they have everything figured out, Lord, send them children.” I don’t think anyone laughed aloud, but a hint of sound rippled through the church.

I don’t cry at funerals, but weddings always get me. Of all Katie’s relatives, I was closest to her grandmother, John’s Aunt Kay. This time tears came in my eyes as I thought how very proud Aunt Kay would have been. Katie was named for her, and she would have admired her granddaughter for her beauty, accomplishments, and most of all, her loving heart.

The reception was in the stable building of a nearby plantation. It was the most humane reception I’ve ever been to. The eardrum-bursting band was inside the building, and the dining tables were in a large tent. We could hear conversation all around our table! We chatted with the bride’s cousins while Barbara and Thom danced.