Back when I was a girl, people rarely talked to others outside their town. You either saw each other face to face or talked on the telephone. Calling outside your area (long distance) was reserved for emergencies. When I was in college 50 miles away, I dropped my parents a note in the mail if I wanted to tell them something. Mailing letters continued when I married and lived in New York. It’s a wonder I remembered how to use the phone, since I had such little practice. There was no such thing as losing a phone. There was generally one per household, and it was wired to the wall. This is beginning to sound almost prehistoric. In the early 80s, when we lived in England for two years, we had two transatlantic phone calls. One let us know a favorite niece was going blind, and the other told us my brother’s wife died.

I would never have dreamed of something that happened today. I was walking around in the house, involved with three conversations (texts) on my phone at once. One person was across the street, another in Denmark, and the third in Qatar. That is amazing to me. With a bit of planning, we could have seen each other’s faces as we talked! I cannot imagine the inventions that will come in the future, but I hope people will delight in them. 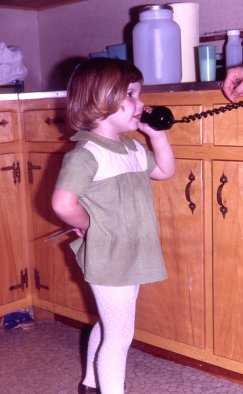 The photo:  In 1970 I took a picture of niece Kathie on her third birthday in NC talking to her grandmother (my mom) in TN. Note the wire attached to the clunky phone.  I suppose I was impressed with our modern technology at the time!

54 thoughts on “Delighting in Technology”